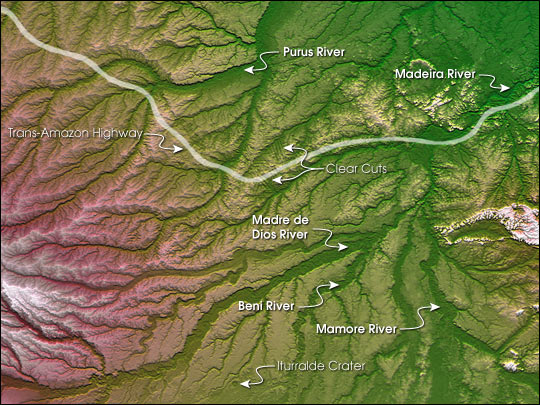 Pando Province, Bolivia, and adjacent parts of Brazil and Peru are seen in this visualization of Shuttle Radar Topography Mission (SRTM) elevation data covering part of the Amazon Basin. Most of this region is covered by tropical rainforest and is still largely unaltered by development, though new roads are providing increased access to the area, leading to changes in the landscape. SRTM data provide the first detailed three-dimensional look at the landforms of this region, and the Amazon Basin in its entirety, and will be particularly helpful in understanding the hydrologic patterns as environmental management becomes increasingly important.

River drainage across this area flows generally east-northeast away from the nearby Andes Mountains. The most prominent river channels seen here are the Purus River in the northwest (upper left) and the Madre de Dios River, which crosses the south central (lower central) part of this view. The Beni and Mamore Rivers combine with the Madre de Dios in the eastern (right central) area to form the Madeira River, which flows northeast to eventually meet the Amazon River near Manaus.

The Trans-Amazon Highway crosses the northern half of the scene, and subtle evidence of rainforest clear cutting, facilitated by this easy access, is apparent just north of the scene center, even at the low resolution of this display. As seen here, clear cutting patterns in the rainforest typically show a pattern of parallel lines. SRTM mapped the shape of the Earth’s solid surface (not exclusively the ground surface), which includes to some degree land covers such as forests. Thus, SRTM data are capable of revealing deforestation patterns.

A combination of visualization methods was used to produce this image, based on shading and color coding. A shade image was derived by computing topographic slope in the north-south direction. Northern slopes appear bright and southern slopes appear dark. Color coding is directly related to topographic height, with green at the lower elevations, rising through yellowish and reddish tans, to white at the highest elevations. A measure of relative local topographic height was added as brightness to enhance the contrast of stream channels to their surrounding terrain.