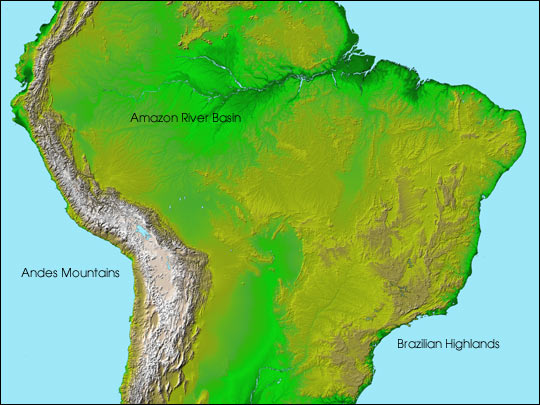 This image of South America was generated with data from the Shuttle Radar Topography Mission (SRTM). For this broad view the resolution of the data was first reduced to 30 arcseconds (about 928 meters north-south but variable east-west), matching the best previously existing global digital topographic data set called GTOPO30. The data were then resampled to a Mercator projection with approximately square pixels (about one kilometer, or 0.6 miles, on each side). Even at this decreased resolution the variety of landforms comprising the South American continent is readily apparent.

East of the Andes, much of northern South America drains into the Amazon River, the world’s largest river in terms of both watershed area and flow volume. Topographic relief is very low in much of the Amazon Basin but SRTM data provide an excellent detailed look at the basin’s three-dimensional drainage pattern, including the geologic structural trough (syncline) that hosts the eastern river channel.

South of the Amazon, the Brazilian Highlands show a mix of landforms, including some broad areas of consistent topographic patterns that indicate the occurrence of simple erosional processes acting upon fairly uniform bedrock. Very smooth plateaus here are remnants of landforms most likely developed under geologic and environmental conditions much different than those present today. Fractures paralleling the coast are likely related to the opening of the Atlantic Ocean as South America drifted away from Africa, starting about 130 million years ago.

Elevation data used in this image were acquired by the Shuttle Radar Topography Mission aboard the Space Shuttle Endeavour, launched on Feb. 11, 2000. SRTM used the same radar instrument that comprised the Spaceborne Imaging Radar-C/X-Band Synthetic Aperture Radar (SIR-C/X-SAR) that flew twice on the Space Shuttle Endeavour in 1994. SRTM was designed to collect 3-D measurements of the Earth’s surface. To collect the 3-D data, engineers added a 60-meter (approximately 200-foot) mast, installed additional C-band and X-band antennas, and improved tracking and navigation devices.