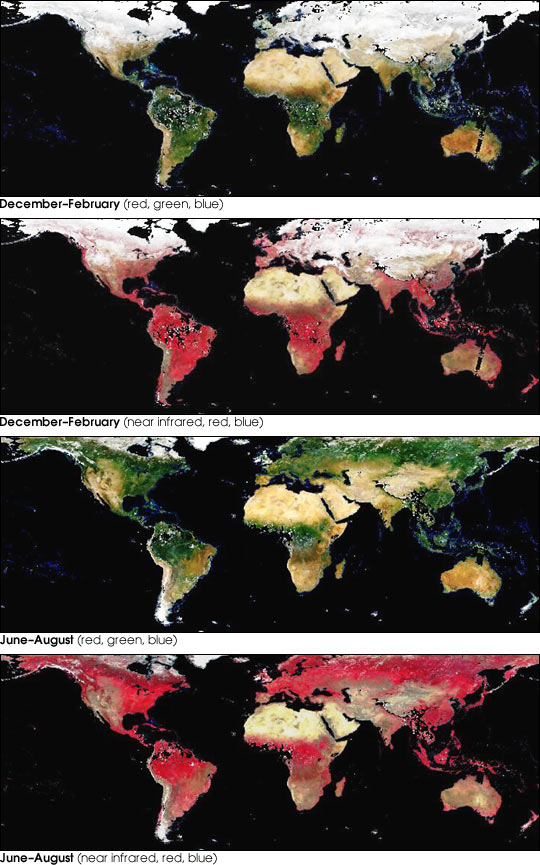 Global models of the Earth system need accurate measurements of how much solar energy is reflected and absorbed by surfaces because this energy drives processes such as plant photosynthesis, snow melt, and longwave reradiation. These images from the Multi-angle Imaging SpectroRadiometer (MISR) provide global, seasonal summaries of a quantity called the Directional Hemispherical Reflectance (DHR), also sometimes referred to as the “black-sky” albedo.

The amount of sunlight reflected from a surface, relative to the incident amount, is called the albedo. Bright surfaces have albedo near unity, and dark surfaces have albedo near zero. The DHR refers to the amount of spectral radiation reflected into all upward directions through an imaginary hemisphere situated above each surface point. The “directional” part of the name describes how, in the absence of an intervening atmosphere, light from the Sun would illuminate the surface from a single direction (that is, there is no diffuse skylight, hence the name “black-sky” albedo). To generate this product accurately, it is necessary to compensate for the effects of the atmosphere, and MISR’s multi-angle retrieval techniques are used to screen clouds and account for the light scattered by airborne particulates (aerosols).

The four image panels show DHR as it was retrieved over land surfaces in MISR’s red, green, blue spectral bands (left), and near-infrared, red, blue spectral bands (right), for the seasonal periods December 2001 through February 2002 (top), and June 2002 through August 2002 (bottom). A one-year movie is also provided. Since relatively little sunlight reaches the polar regions during winter, the images were cropped to include only the area which is illuminated in both hemispheres during winter and summer. Noteworthy features include seasonal vegetation and the advance and retreat of the snow line. Regions where DHR could not be derived, either due to an inability to retrieve the necessary atmospheric characteristics or due to the presence of clouds, are shown in black. Further global summaries of the DHR (and other surface and vegetation products) from MISR are now available at the NASA Langley Atmospheric Sciences Data Center.

The Multi-angle Imaging SpectroRadiometer observes the daylit Earth continuously from pole to pole, and every 9 days views the entire globe between 82 degrees north and 82 degrees south latitude.

Drought in the Black Hills