Since June 10, 2003, the Aspen Fire has been burning in the Catalina Mountains roughly 17 miles (27 km) northeast of Tucson, Arizona. Fueled by the dry vegetated landscape around Mount Lemmon and fanned by gusty desert winds, the wildfire intensified and spread rapidly, consuming more than 25,000 acres and at least 300 homes and businesses in a two-week span. The cause of the fire is not known, but some officials suspect it was triggered by a lightning strike. Some 1,200 firefighters are currently battling the blaze and they estimate it was about 25 percent contained when the above image was taken from aboard NASA’s high-flying ER-2 Aircraft.

These MODIS Airborne Simulator images, acquired on June 24, 2003, show the site of the Aspen Fire in true color (top) and, using the sensor’s infrared detectors, false color (bottom). Whereas much of the surface detail is obscured by smoke in the top scene, notice how much detail on the surface is revealed in the bottom image. Untouched vegetated land surface appears green, bare rock and land surface look orange-brown, the smoldering scar left by recently-burned areas shows up as crimson, and the actively-burning fire front is the bright red-orange ribbon around the burn scar’s perimeter. The most intense fire fronts visible in this image can be seen both to the north and south of the burned area, as well as along much of the western perimeter. 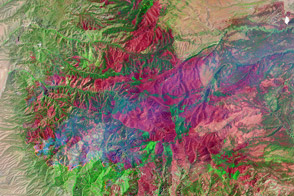 The Whitewater-Baldy Fire is the largest on record in New Mexico.