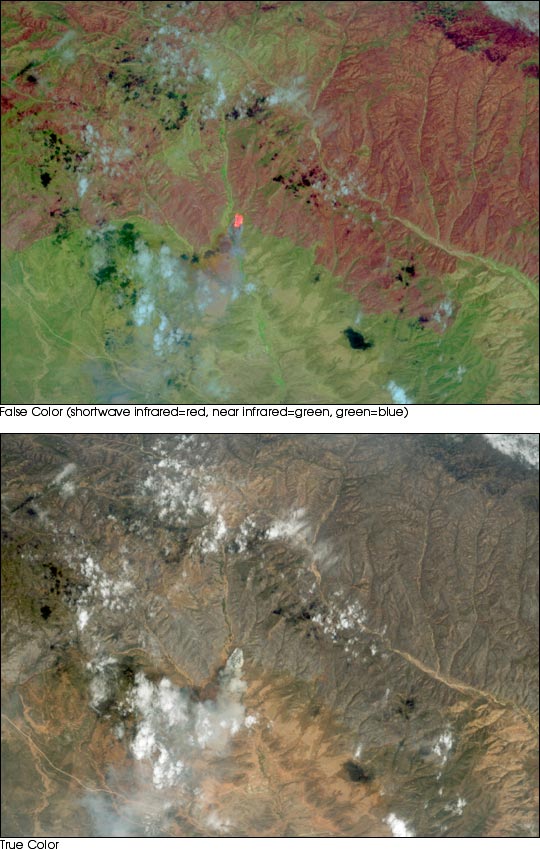 New images of Arizona’s Rodeo-Chediski wildfire, which according to news reports is the largest in the state’s history, have been acquired by NASA’s MODIS Airborne Simulator flying aboard the space agency’s ER-2 aircraft. The images show the extent of the burn area—now more than 450,000 acres—and pinpoint areas of active burning as of the morning of July 1. The images below include both true-color images and false-color images designed to highlight the burned areas. They were acquired during a transit of the ER-2 aircraft from NASA’s Dryden Flight Research Center, Edwards, Calif. to Key West Naval Air Facility, Fla. in preparation for an upcoming field experiment. The newly acquired wildfire images will be used to validate rapid response wildfire maps produced by NASA’s Moderate Resolution Imaging Spectroradiometer (MODIS) instrument aboard the Terra spacecraft. They will also be provided to the U.S. Forest Service for potential use in post-fire damage assessments.

The false-color image (top) shows the southern portion of the fire, and reveals that not all the terrain within the fire’s perimeter burned to the same degree. Burned areas are red and remaining vegetation is green. In the center of the image, the bright orange pixels are actively burning fire, and the smoke drifting southward from the blaze appears blue. Burned area at the top of the true-color image (bottom) appears charcoal, and a smoke plume drifting southwest from the center of the image reveals the location of actively burning fire.