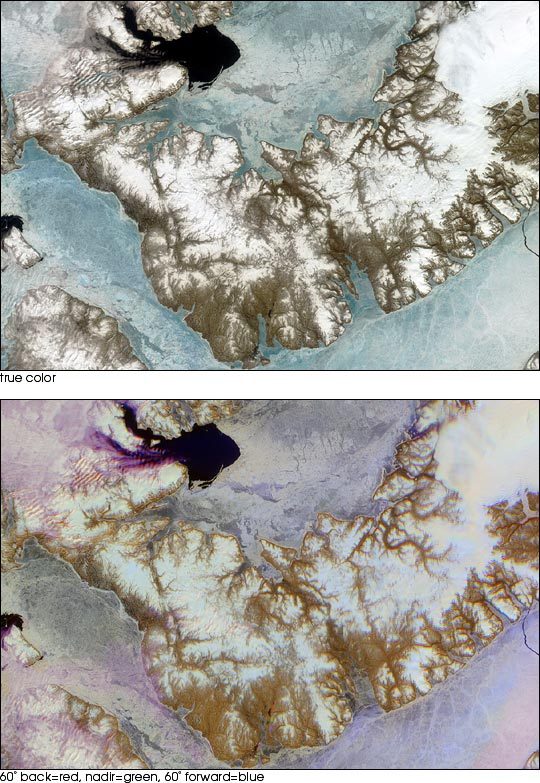 Devon Island is situated in an isolated part of Canada’s Nunavut Territory, and is usually considered to be the largest uninhabited island in the world. However, each summer since 1999, researchers from NASA’s Haughton-Mars Project and the Mars Society reside at this“polar desert” location to study the geologic and environmental characteristics of a site which is considered to be an excellent“Mars analog”: a terrestrial location wherein specific conditions approximate environmental features reported on Mars. Base camps established amidst the rocks and rubble surrounding the Haughton impact crater enable researchers to conduct surveys designed to test the habitat, equipment and technology that may be deployed during a human mission to Mars. One of the many objectives of the scientists is to understand the ice formations around the Haughton area, in the hopes that this might ultimately assist with the recognition of areas where ice can be found at shallow depth on Mars.

These images of Devon Island from NASA’s Multi-angle Imaging SpectroRadiometer (MISR) instrument provide contrasting views of the spectral and angular reflectance“signatures” of different surfaces within the region. The top panel is a natural color view created with data from the red, green and blue-bands of MISR’s nadir (vertical-viewing) camera. The bottom panel is a false-color multiangular composite of the same area, utilizing red band data from MISR’s 60-degree backward, nadir, and 60-degree forward-viewing cameras, displayed as red, green and blue, respectively. In this representation, colors highlight textural properties of elements within the scene, with blue tones indicating smooth surfaces (which preferentially forward scatter sunlight) and red hues indicating rougher surfaces (which preferentially backscatter). The angular reflectance“signature” of low clouds causes them to appear purple, and this visualization provides a unique way of distinguishing clouds from snow and ice.

The data were captured on June 28, 2001, during the early part of the arctic summer, when sea ice becomes thinner and begins to move depending upon localized currents and winds. In winter the entire region is locked with several meters of nearly motionless sea ice, which acts as a thermodynamic barrier to the loss of heat from the comparatively warm ocean to the colder atmosphere. Summer melting of sea ice can be observed at the two large, dark regions of open water; one is present in the Jones Sound (near the top to the left of center), and another appears in the Wellington Channel (left-hand edge). A large crack caused by tidal heaving has broken the ice cover over the Parry Channel (lower right-hand corner). A substantial ice cap permanently occupies the easternmost third of the island (upper right). Surface features such as dendritic meltwater channels incised into the island’s surface are apparent. The Haughton-Mars project site is located slightly to the left and above image center, in an area which appears with relatively little surface ice, near the island’s inner“elbow”.