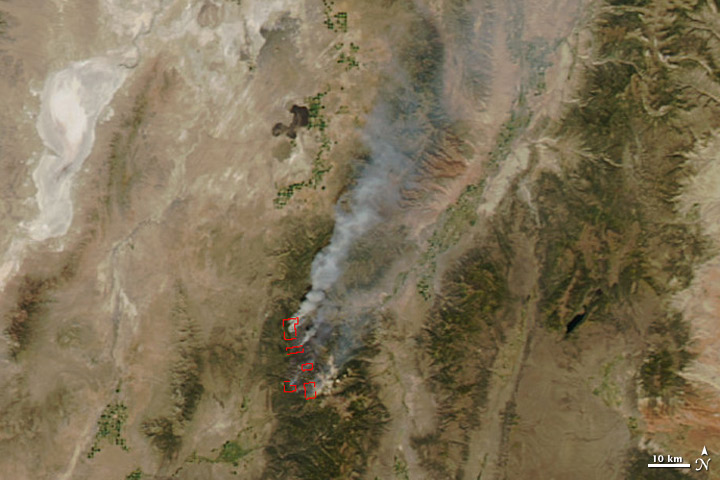 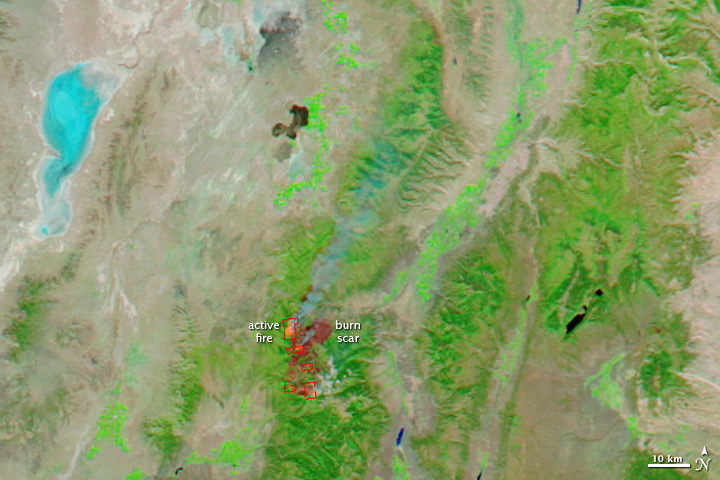 By the morning of September 22, 2010, central Utah’s Twitchell Canyon Fire had consumed about 33,687 acres of Fishlake National Forest, making it the largest active wildfire currently burning in the United States. The Moderate Resolution Imaging Spectroradiometer (MODIS) on NASA’s Aqua satellite captured these images of the fire on the afternoon of September 21. The top image shows the fire in photo-like true color, while the lower image combines both infrared and visible light in a false color image that highlights recently burned land.

In both images, areas in which MODIS detected fire are outlined in red. Gusty winds are evident in the true color image, which shows plumes of smoke blowing northeast from the fire. On September 21, the National Weather Service had issued a Red Flag Warning for the fire region, indicating that strong winds and low humidity increased the probability of extreme burning conditions. Firefighters observed the predicted extreme fire behavior in the form of flames 200 feet (61 meters) long, said fire managers.

The false color image provides a better idea of how much land had burned as of September 21. In the false-color image, the forest-covered mountains are dark green, while the surrounding desert is light tan. Farmland is a lighter shade of green. The newly burned land is brick red, and smoke is faintly blue. The active fire glows orange as the heat from the flames saturates the short-wave infrared wavelengths of light (2,155 nanometers) assigned to the color red in the image.

Twice-daily images of central Utah are available from the MODIS Rapid Response Team in both true and false color.