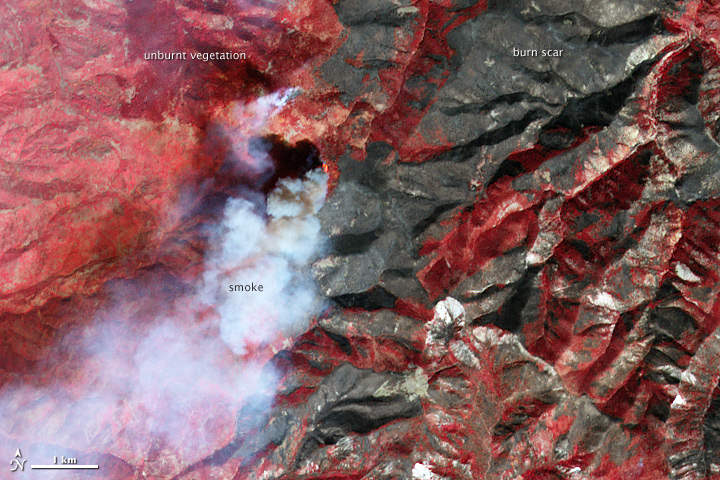 A lightning strike on July 20, 2010, started the Twitchell Canyon Fire in Utah. More than two months later, the fire continued to burn and had consumed 44,000 acres in the Fishlake National Forest. Weather conditions have continued to be conducive to burning, with low humidity, high winds, and thunderstorm activity, all of which increase the hazard of the fire. Over 500 fire fighters were working to establish fire breaks and to direct fight the flames, which were 30% contained on October 1, according to the InciWeb Incident Information System. Active fire fronts were being attacked with large aircraft and helicopters dropping fire retardant.

This image was acquired by the ASTER instrument on NASA’s Terra satellite on the morning of September 29, 2010. This false-color image uses near infrared light, and vegetation appears red in this treatment. Bare land appears in shades of tan and pale grey, burnt areas are charcoal-toned, and water appears blue. False-color imagery such as this is particularly good at showing the extent and severity of burned areas: the deep grey tones show where fires were especially intense.