Drought in the Black Hills 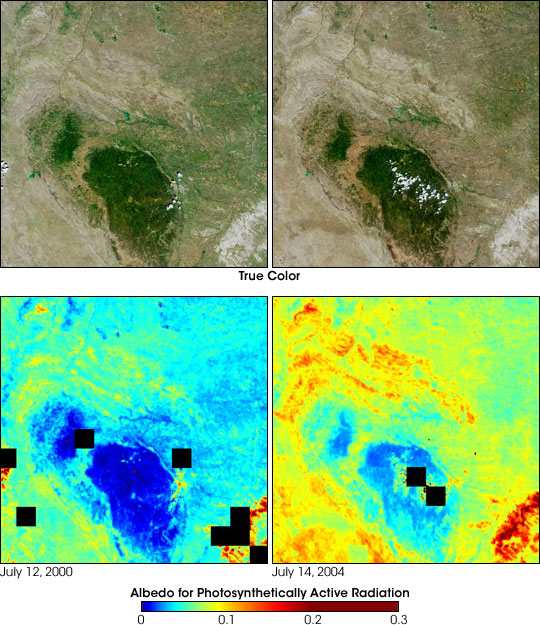 Despite good rainfall and record-setting snowstorms in the spring of 2005, most of northeastern Wyoming, the Black Hills, and western South Dakota remain in the midst of a severe drought. This set of images and maps from NASA’s Multi-angle Imaging SpectroRadiometer (MISR) contrasts the appearance of the Black Hills region of northwestern South Dakota on July 12, 2000 (left column), with views acquired four years later, on July 14, 2004 (right column). The natural-color images along the top are from MISR’s nadir (downward-looking) camera. The browning that appears in 2004 compared with 2000 indicates that the vigor of green vegetation was significantly diminished in 2004.

The color-coded maps (along the bottom) provide a quantitative measurement of the sunlight reflected from these surfaces and the loss of sunlight-absorbing vegetation between the 2000 and 2004 dates. As the vegetation faded with the drought, the albedo at the surface increased. Albedo measures the fraction of incident sunlight that is reflected by a surface, and can vary between zero (if all the incident sunlight is absorbed and none is reflected) and one (if all sunlight is reflected and none is absorbed). Dense forest has a low albedo; bright desert, snow and clouds, have a high albedo. Here, albedo is provided for the wavelengths of sunlight that plants use for photosynthesis (400–700 nanometers). This measurement is known as the albedo for Photosynthetically Active Radiation (PAR). Surfaces with greater absorption of PAR appear here in blue hues, whereas surfaces with lower absorption appear as green, yellow, orange or red. Black pixels indicate areas where albedo could not be derived, usually due to the presence of clouds. In July 2004, low-albedo areas (blue) are smaller, and higher-albedo areas (yellow, orange and red) are larger.

Because incoming sunlight is scattered by tiny particles (aerosols) in the atmosphere, satellite measurements of albedo and other surface properties must correct for the effects of the intervening atmosphere. These albedo retrievals make use of MISR’s simultaneously derived aerosol properties to make these corrections. The multiangular nature of MISR data is also used to account for the fact that most surfaces reflect sunlight into all upward directions, with intensities that vary with angle of view.

The Multi-angle Imaging SpectroRadiometer observes the daylit Earth continuously and every 9 days views the entire globe between 82 degrees North and 82 degrees South latitude. This image area covers about 243 kilometers by 243 kilometers. These data products were generated from a portion of the imagery acquired during Terra orbits 3020 and 24325 and utilize data from within blocks 54 to 56 within World Reference System-2 paths 33 and 34.