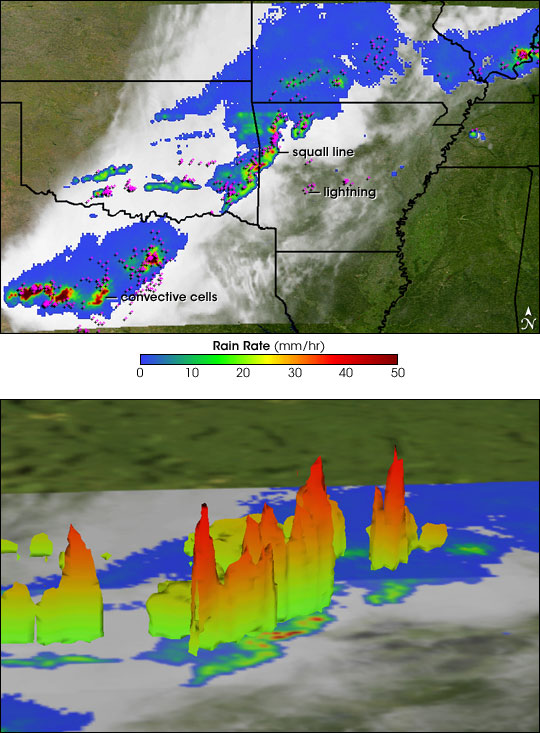 It is not uncommon for severe weather to strike the plains of the midwestern United States in the spring. Storm systems organizing east of the Rockies in the springtime are known for delivering severe weather to the central United States. This was the case on May 13 and 14, 2005, when cold air coming down from the Rockies collided with warm, moist air coming up from the Gulf of Mexico. Strong storms with hail and gusty winds pounded the country from the panhandle of Texas into the Ohio valley and Mid-Atlantic.

The Tropical Rainfall Measuring Mission (TRMM) satellite captured these images of the storms on May 14. The top image shows an instantaneous snapshot of a storm complex that extended from northern Texas into eastern Oklahoma and western Arkansas. The image was taken at 1:29 a.m. U.S. Central Daylight time and shows the horizontal distribution of rain intensity as seen from above. Rain rates in the center swath are from TRMM's precipitation radar—the first and only precipitation radar in space—while rain rates in the outer swath are from the TRMM Microwave Imager (TMI). The rain rates are overlaid on infrared (IR) data from the TRMM Visible Infrared Scanner (VIRS). In this image, a wavy squall-line type system stretches across eastern Oklahoma. A squall line is characterized by a linear convective leading edge having strong updrafts and heavy rain (red areas) followed by stratiform rain, a broad area of light rain (green and blue areas). Strong winds can distort the linear features of a squall line into the sort of wavy pattern seen here, and indeed, wind damage was reported in Oklahoma and Arkansas where the squall line passed.

More intense convective cells (dark red) sit over north-central Texas, where there were several hail reports associated with the storms. The storm also produced a great deal of lightning, as revealed by the lightning data from the TRMM Lightning Imaging Sensor (LIS), which have been overlaid on the rain rates in the top image. The clusters of magenta-colored crosses indicate areas of lightning activity observed near the time of the image and include cloud-to-cloud, cloud-to-ground, and intracloud flashes.

The lower image shows a 3-D perspective view of the 30-decibel radar echo, the type of signal received over regions of moderately intense rain, associated with the squall line along the Oklahoma-Arkansas border. The surface is colored according to the height of the surface with red being the highest. The higher the surface, the more intense the convection is. Echoes near this intensity that penetrate above the -10 to -20 degrees Celsius level are also a good indication of the potential for cloud-to-ground lightning. The cluster of magenta crosses along the squall line confirm the intensity of lightning in the region.