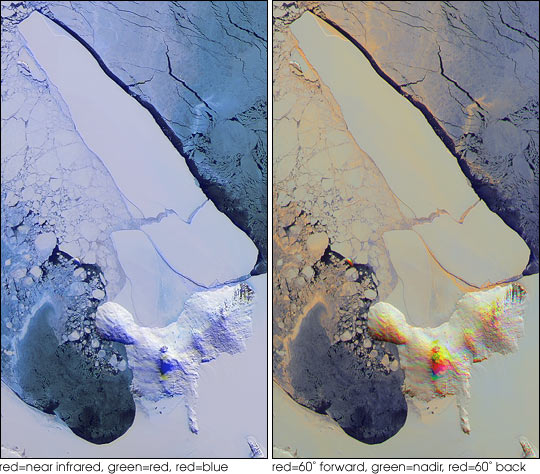 Iceberg B-15A was the largest iceberg in the world (measuring about 11,000 square kilometers) when it broke away from Western Antarctica’s Ross Ice Shelf in March 2000. It held that distinction for over three years until splitting into two pieces in early October, 2003. The Multi-angle Imaging SpectroRadiometer (MISR) acquired these views of the new iceberg B-15J (resting against Ross Island) and B-15A (now free to drift into the Southern Ocean) on October 26. Several massive icebergs (including B-15A) had migrated during 2000 and 2001 and ground against Ross Island, forming a barrier that influenced wind and current patterns and altered the regional ecology.

The Multi-angle Imaging SpectroRadiometer observes the daylit Earth continuously and every 9 days views the entire Earth between 82 degrees north and 82 degrees south latitude. The MISR Browse Image Viewer provides access to low-resolution true-color versions of these images. These data products were generated from a portion of the imagery acquired during Terra orbit 20511. The panels cover an area of 129 kilometers x 221 kilometers, and utilize data from blocks 153 to 155 within World Reference System-2 path 56.