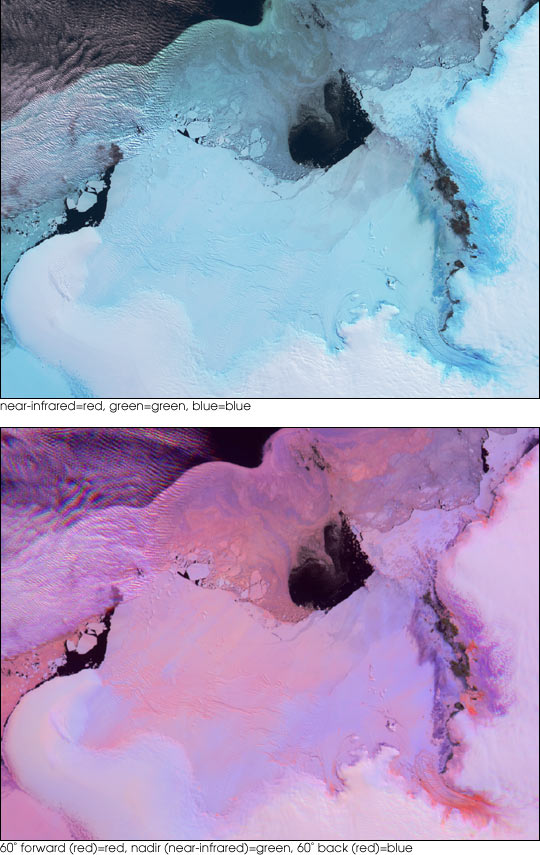 These views from the Multi-angle Imaging SpectroRadiometer (MISR) portray the Lutzow-Holm Bay region of Queen Maud Land, East Antarctica, on September 5, 2002. Although Queen Maud Land remains one of the least studied regions of Antarctica, Lutzow-Holm Bay is an exception. Syowa (pronounced ‘Showa’) Station is the Japanese Antarctic Research Expedition base situated on Ongul Island, just off the eastern coast of the Bay (in the top right-hand portion of these views). Scientists there have studied changes in the ice sheet and sea level for several decades. Large outlet glaciers, such as the fast-flowing Shirase Glacier in the lower right-hand corner of these images, are the primary drainage systems for the Antarctic ice sheet.

These two views provide information on both the spectral and angular reflectance properties of the region and can be used to understand the geophysical environment. The top panel shows the region from MISR’s downward-looking (nadir) camera and is a false-color view in which the near-infrared, green and blue spectral bands have been displayed as red, green and blue. Because of the tendency of water to absorb near-infrared wavelengths, some ice types exhibit an especially bright blue hue in this display.

The lower panel is a multi-angular composite from three MISR cameras in which changes in reflection at different view angles, as well as in the near-infrared spectral region, assist with the identification of rough and smooth ice surfaces. In this display, red band data from MISR’s 60-degree forward and backward-viewing cameras are displayed as red and blue, respectively, and near-infrared data from the nadir camera are displayed as green. Using this technique, surfaces that predominantly exhibit backward scattering (generally rough surfaces) appear red/orange, and surfaces that predominantly exhibit forward scattering (generally smooth surfaces) appear in blue hues. Clouds (and other surfaces that exhibit both forward and backward scattering) appear purple.

The Multi-angle Imaging SpectroRadiometer observes the daylit Earth continuously and every 9 days views the entire globe between 82 degrees north and 82 degrees south latitude. The MISR Browse Image Viewer provides access to low-resolution true-color versions of these images. These data products were generated from a portion of the imagery acquired during Terra orbit 16454. The panels cover an area of about 335 kilometers x 257 kilometers.