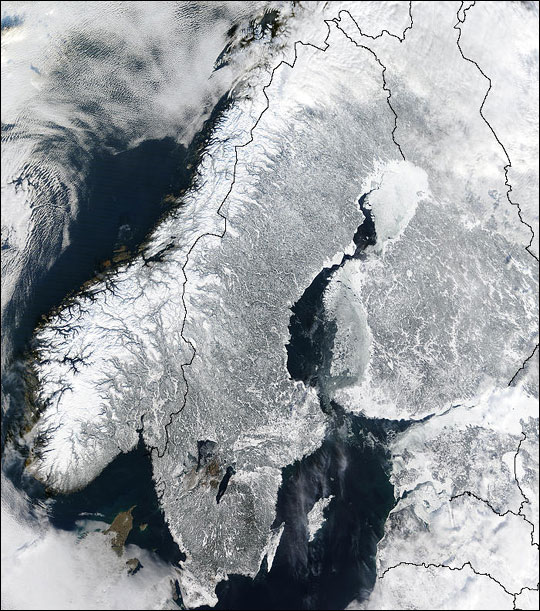 With a landscape largely shaped by glaciers over the last ice age, the Scandinavian Peninsula is as picturesque in the winter as it is cold. The Moderate Resolution Imaging Spectroradiometer (MODIS) instrument aboard NASA’s Terra satellite captured the above image of the Scandinavian Peninsula on February 19, 2003. Along the left side of the peninsula, one can see the jagged inlets, known as fjords, lining Norway’s coast. Many of these fjords are well over 2,000 feet (610 meters) deep and were carved out by extremely heavy, thick glaciers that formed during the last ice age. The glaciers ran off the mountains and scoured troughs into Norway’s coastline with depths that reached well below sea level. When the glaciers melted, the seawater rushed into these deep troughs to form the fjords. The deepest fjord on Norway’s coast, known as Sogn Fjord, lies in southwest Norway and is 4,291 feet (1,308 m) deep.

Glaciers also carved the mountains in Norway and northernmost Sweden. South of this mountainous region, however, Sweden consists mostly of flat, heavily forested land dotted with lakes. Lake Vanern and Lake Vattern, the largest of Sweden’s lakes, do not freeze completely during the winter months and can be seen clearly at the bottom of the peninsula. Lake Vattern, the smaller of the two lakes, was connected to the Baltic Sea during the last ice age. After the ice melted, a tremendous weight was lifted off of the peninsula, and the landmass rose up to separate the lake from the Baltic Sea. To the northeast of the peninsula lies Finland with more than 55,000 lakes, most of which were also created by glacial deposits.