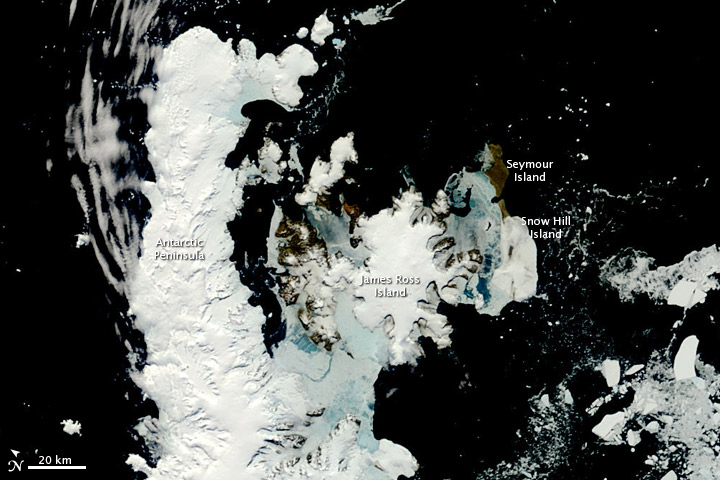 Summer was rapidly approaching when the Moderate Resolution Imaging Spectroradiometer (MODIS) on NASA’s Terra satellite caught this rare, nearly cloud-free view of the northern tip of the Antarctic Peninsula. This image from November 15, 2010, was cropped from the mosaic of Antarctica, produced daily by the MODIS Rapid Response System.

The peninsula and the surrounding islands were rapidly losing the shield of sea ice that surrounds them in winter. Winds had been blowing out of the west, pushing the sea ice east, towards the lower right of the image. These east-blowing winds channeled down the mountains, bringing warmer air to the east side of the peninsula. The remaining sea ice around the James Ross, Seymour, and Snow Hill Islands melted in response. Water-saturated ice is pale blue.

Scientists are very interested in the Antarctic Peninsula because it has warmed significantly since weather stations began collecting data there. In the past decade, the Larson B and Wilkins Ice Shelves collapsed at least partly because of warming temperatures. The ice shelves had acted as plugs, slowing the flow of glaciers from the mountainous peninsula into the ocean. With the shelves gone, the glaciers accelerated their flow, rapidly shedding ice into the Southern Ocean.

To better understand how the glaciers have responded since the ice shelves collapsed, NASA scientists are flying over the peninsula in a plane equipped with instruments to measure how the ice is changing. So far, many glaciers, including the Crane Glacier, have not slowed their flow. The flights are part of NASA’s IceBridge Mission.

If weather permits, NASA IceBridge scientists will be available for a live chat from the mission’s base in Punta Arenas, Chile on Thursday, November 18, 2010, 1-2 EST.