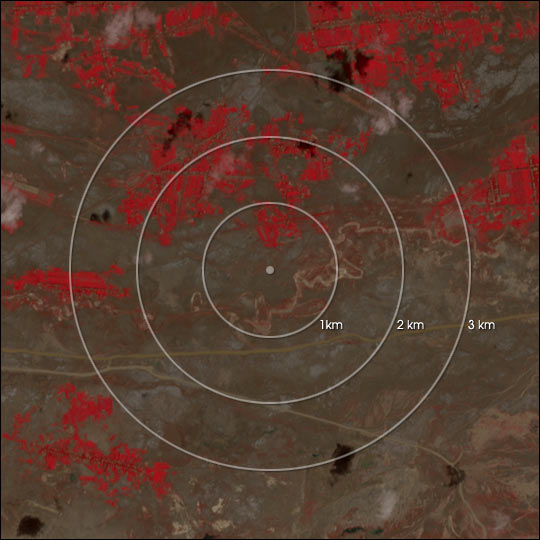 A destructive earthquake of magnitude 6.4 rattled China’s Xinjiang province at 10:04 AM (local time) on February 24, 2003. Over 250 people were killed. This remote, flat, and mostly featureless area of western China (called the Tarim Basin by geologists) is different from most other regions with frequent earthquakes. Typical seismically active areas are mountainous, like Alaska and coastal California, and lie along the boundaries of tectonic plates. In contrast, the Tarim Basin (which lies on the Eurasian Plate) remains flat while it is being squeezed by the motion of the Indian Plate—which is 1000 km (620 miles) away. Instead of deforming into belts of mountain ranges, the Tarim Basin is transmitting force applied by the Indian Plate to the interior of Asia, where the Tian Shan mountains are rising. (the Tian Shan can be seen at the top edge of the large image)

The aproximate epicenter of the earthquake is represented by a white dot in this image, acquired on August 29, 2001 (before the earthquake) by the Advanced Spaceborne Thermal Emission and Reflection Radiometer (ASTER). ASTER is an instrument aboard NASA’s Terra satellite. The false color-image combines near infrared, red, and green wavelengths. Crops, almost certainly irrigated, appear red, while barren landscape appears brown.