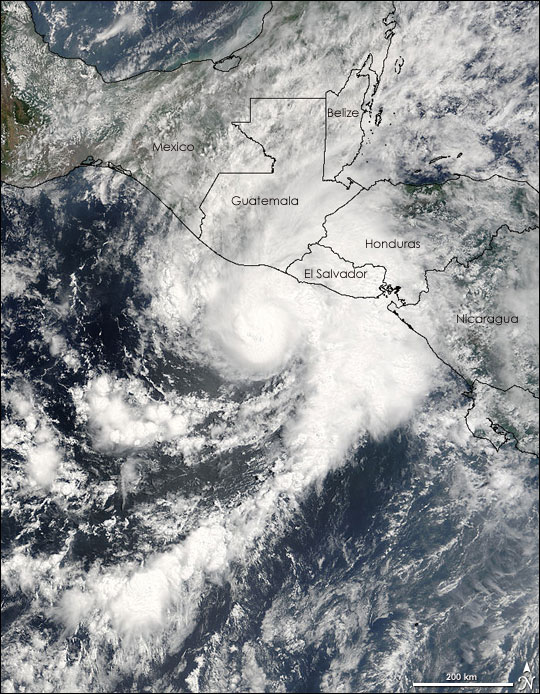 Hurricane Adrian was zeroing in on the Pacific coast of El Salvador and Guatemala when the Moderate Resolution Imaging Spectroradiometer (MODIS) on NASA’s Terra satellite captured this image on May 19, 2005, at 10:45 a.m., Pacific Daylight Time. This highly unusual storm is the first of the 2005 Pacific hurricane season, having formed on May 17, just two days after the season officially started. The storm intensified over a pocket of warm water and moved east towards Guatemala and El Salvador. Adrian reached hurricane status about the time this image was acquired.

Hurricane Adrian is unusual not because of its strength—it’s actually a weak storm— or because of its timing, though no tropical storm has ever struck Central America this early in May; rather, Adrian is rare because of its path. Most hurricanes that form in the Pacific head north into Mexico or west to dissipate over the ocean. Adrian moved east. Since 1966, only four cyclones have made landfall over Guatemala or El Salvador, and Adrian’s current path will make it the fifth. The outer bands were already over land when MODIS captured this image.

The biggest threat that Adrian poses to Central America is from the heavy rain it will dump on the region. Rugged mountains stretch across El Salvador, Guatemala, and Honduras, and heavy rain could trigger flash floods and mudslides.

If Adrian survives its encounter with the mountains of Central America, it could emerge as a tropical system in the Caribbean. Occasionally, storms will cross from the Atlantic into the Pacific, but it is rare for a storm to move from the Pacific into the Atlantic, as Adrian could.

Additional images of Adrian are available in the Natural Hazards section of the Earth Observatory. The large version of this image has a resolution of 250 meters per pixel. The image is available in additional resolutions from the MODIS Rapid Response Team.