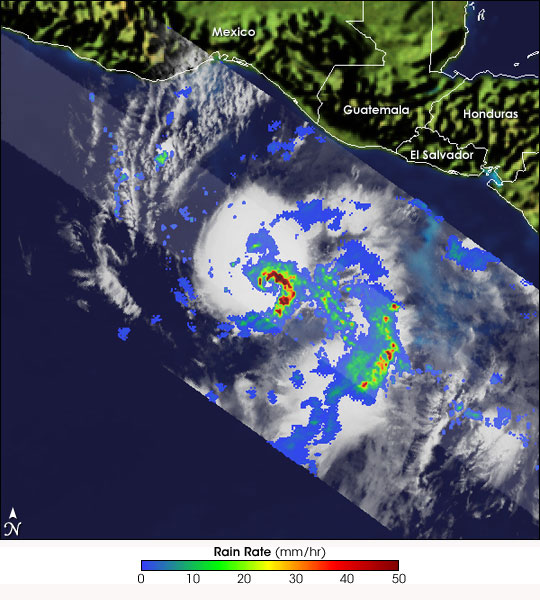 Only four tropical cyclones have made landfall over Guatemala or El Salvador since 1966: Tropical Storm Adrian is about to become the fifth. Adrian is the first tropical storm of the 2005 Pacific hurricane season, which officially runs from May 15 through November 30. Adrian formed on May 17, 2005, making it a slightly unusual, early-season storm. No tropical cyclone has crossed Central America this early in May since records began, reports the National Hurricane Center.

Even more unusual than the timing of this storm is its path. Typically, hurricanes that form in the Eastern Pacific curve west to dissipate over the ocean, or they may move north into Mexico. Adrian is moving east and is expected to make landfall over El Salvador and Guatemala on May 19. Its path is predicted to take it over the same region that was devastated by Hurricane Mitch in 1998. Unlike Adrian, Mitch formed in the Atlantic and crossed this section of Central America from the east. If Adrian survives its encounter with the high mountains of Central America, it could re-emerge in the Caribbean and move over Cuba and the Bahamas. While storms occasionally cross from the Atlantic into the Pacific, it is extremely rare for a storm to move into the Atlantic from the Pacific, however.

Tropical Depression Adrian formed in the afternoon of May 17. By evening, the storm had intensified into a weak tropical storm, and it continued to intensify through the night. It was during this intensification period that the Tropical Rainfall Measuring Mission (TRMM) captured this image of Adrian on May 18 at 3:22 a.m. local time (09:22 UTC). A dark band of red clouds curves around a nearly closed eye in the center of the image. The red—indicative of high rain rates—traces out a convective burst, an area of intense thunderstorms near the core. TRMM research shows that when thunderstorms such as these appear around the core, the likelihood of intensification goes up. Adrian was in fact intensifying when TRMM captured this image, making this a valuable picture of the genesis of a storm.

The semi-circle of heavy rain also helped researchers identify the center of the storm early in its development. Without TRMM’s precipitation radar, the storm would simply be an amorphous blob, with no clearly defined center.

The National Hurricane Center predicts that Adrian will continue to intensify, possibly into a weak hurricane, before striking the coast of Central America on May 19. Unusually warm waters—as warm as 30 degrees Celsius (86 Fahrenheit)—are feeding the storm. Adrian has the potential to unleash heavy rains and floods on the mudslide-prone, mountainous coastal region.