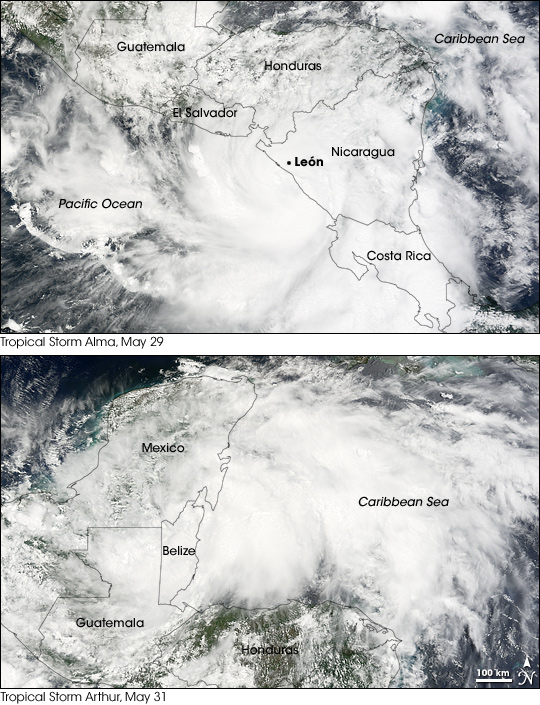 Both the eastern Pacific and Atlantic hurricane seasons of 2008 were inaugurated within a few days of each other in late May and the first days of June. That these two “season openers” occurred in the same week wasn’t simply a coincidence: they were related. On May 29, thunderstorms over the Pacific Ocean about 250 miles southwest of Nicaragua became Tropical Storm Alma: the first named storm of the 2008 eastern Pacific season. Alma moved north and made landfall on the coast of Nicaragua. As it crossed Central America, the storm fell apart as a circulating system, but the remaining moisture and energy emerged over the Gulf of Honduras to the north. There, on May 30, those remnants spun up into Tropical Storm Arthur: the first named storm of the Atlantic season.

On Thursday, May 29, the Moderate Resolution Imaging Spectroradiometer (MODIS) on NASA’s Terra satellite observed Tropical Storm Alma as it was making landfall in Nicaragua. The familiar shape of a hurricane—a pinwheel of clouds spinning around an obvious eye—is hard to make out in the image. The center of circulation was just offshore, south of the city of León. The remains of the storm headed north, and by May 31, when the Moderate Resolution Imaging Spectroradiometer (MODIS) on NASA’s Aqua satellite collected the bottom image, they were helping to fuel Tropical Storm Arthur. The image shows the storm making landfall at Belize.

You can download a 250-meter-resolution KMZ file of the storms suitable for use with Google Earth.