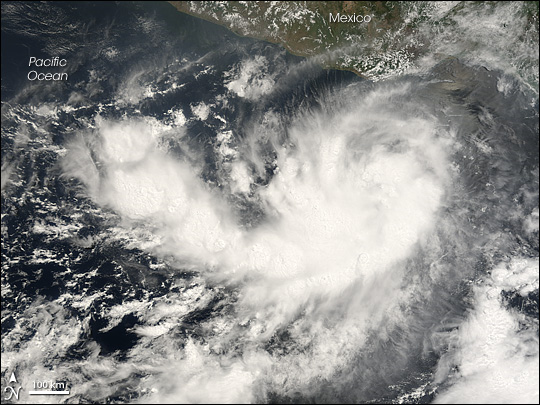 Tropical Storm Barbara, the second named storm of the 2007 Pacific hurricane season, was swirling off the coast of Mexico on May 30, 2007. According to Mexico’s National Meteorological Service (Spanish language site), Barbara had sustained winds that peaked around 100 kilometers per hour (55 miles per hour) on May 29, but had eased off since then. The U.S. National Hurricane Center predicted (as of May 31) that the storm most likely would not become a hurricane, but could bring heavy rain to the Mexican and Guatemalan Pacific coastal regions.

This photo-like image was acquired by the Moderate Resolution Imaging Spectroradiometer (MODIS) on the Terra satellite on May 30, 2007, at 11:05 a.m. local time (17:05 UTC). The storm was a weak system by this time, with only a hint of a circular shape and no eye apparent at its center. According to the University of Hawaii’s Tropical Storm Information Center, Tropical Storm Barbara had sustained winds of 65 km/hr (45 mph) at the time this image was acquired.

You can download a 250-meter-resolution KMZ file of Tropical Storm Barbara for use with Google Earth.

Tropical Storm Barbara was the second named storm of the 2007 Pacific hurricane season.