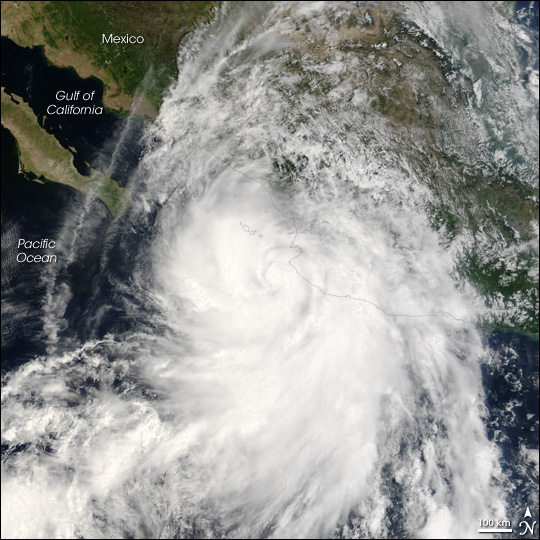 The 2006 Atlantic hurricane season may have had a slow start with no major hurricanes until mid-September, but the Eastern Pacific season was not so quiet. By September 14, when yet another tropical depression (area of low air pressure) reached storm strength and required a name, the National Hurricane Center was already on the twelfth entry in its Pacific storm name list, Lane. During the next 24 hours, Lane grew from storm to hurricane, and continued intensification to reach Category 3 status on September 16.

This photo-like image was acquired by the Moderate Resolution Imaging Spectroradiometer (MODIS) on NASA’s Terra satellite on September 15, 2006, at 12:00 p.m. local time (18:00 UTC). Lane was a very large and well-defined hurricane in this image, possessing a distinct center and spiral-arm structure. However, the eye of the storm was cloud-filled, or “closed,” and the cloud bands were not symmetrical. With the storm center offshore over the Pacific Ocean, the hurricane was able to form and intensify. At the same time, the large portion of the storm over land robbed it of some of its potential power and distorted the storm’s shape. Hurricane Lane had sustained winds of around 130 kilometers per hour (80 miles per hour) at the time this satellite image was acquired, according to the University of Hawaii’s Tropical Storm Information Center.

Despite its interactions with the Mexican coast, Lane was able to intensify after this image was acquired. It came ashore on September 17 and degenerated within a few hours to tropical storm strength. Though the areas of the storm where the sustained peak winds reached as fast as 200 kilometers per hour (120 miles per hour) were not over land, the Pacific coast of Mexico was drenched in heavy rain, pounded with surf and storm surge, and buffeted by powerful winds.