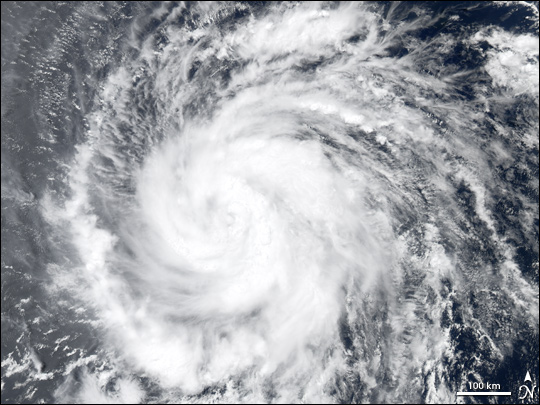 Hurricane Daniel formed in the eastern Pacific Ocean on July 16, 2006, off the Mexican coast south of Baja California. The tropical depression strengthened to storm status in the next day, and as the fourth storm in the Eastern Pacific, was named Daniel. By early morning on July 18, winds in the storm reached 120 kilometers per hour (75 miles per hour), bringing Daniel to hurricane strength, just as the previous three storms of the Eastern Pacific had already done in 2006. Like most hurricanes that form in this region, Daniel tracked out into the Pacific farther away from land. It headed west-northwest, where there is little in the way of barriers to its gathering strength, but also little prospect for it to strike inhabited areas.

This photo-like image was acquired by the Moderate Resolution Imaging Spectroradiometer (MODIS) on the Aqua satellite on July 18, 2006, at 2:10 p.m. local time (21:10 UTC). Daniel has a very well-defined spiral shape and active thunderstorm systems close to the eyewall. At the time the Aqua satellite passed overhead, Daniel had a closed eye: the center of the storm still had cloud cover. Open-eye hurricanes are generally well-developed and powerful systems, a status that Daniel had not yet achieved, though forecasts called for the hurricane to continue to grow in size and strength over the next few days.

Sustained winds in the storm system were estimated to be around 120 kilometers per hour (75 miles per hour) around the time the image was captured, according to the University of Hawaii’s Tropical Storm Information Center, very similar to its strength earlier in the day when it first achieved hurricane status. By July 20, though, the apparent pause in the storm’s gathering power was long over, and sustained winds were reported to be 200 km/hr (125 mph).

Hurricane Daniel formed on July 16, 2006, off the Mexican Pacific coast.

This pair of photo-like images shows Tropical Storm Andres on June 23, over the time the storm intensified from tropical storm to hurricane strength.