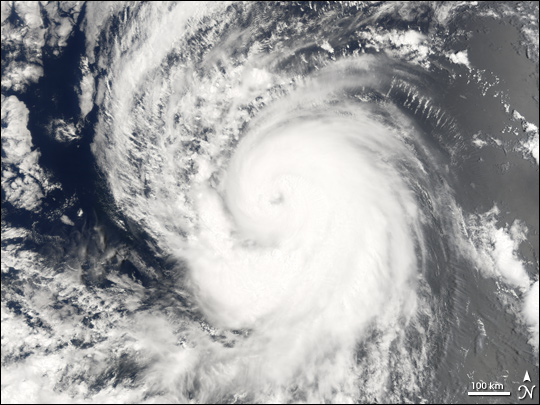 Hurricane Hector formed in the eastern Pacific on August 15, 2006. Within a day, it had become organized enough to be classified as a tropical storm and earn its name. As of August 18, Hector was a moderately powerful Category 1 hurricane, traveling across the eastern Pacific. At that time, it was not expected to develop much additional power or to make landfall.

This photo-like image was acquired by the Moderate Resolution Imaging Spectroradiometer (MODIS) on the Terra satellite on August 17, 2006, at 10:30 a.m. local time (18:30 UTC). Hurricane Hector at the time of this image was a large and well-developed system. The storm had a closed (cloud-filled) but clearly defined eye, with a distinct eyewall. Hurricane Hector had sustained winds of around 150 kilometers per hour (90 miles per hour), according to the University of Hawaii’s Tropical Storm Information Center.