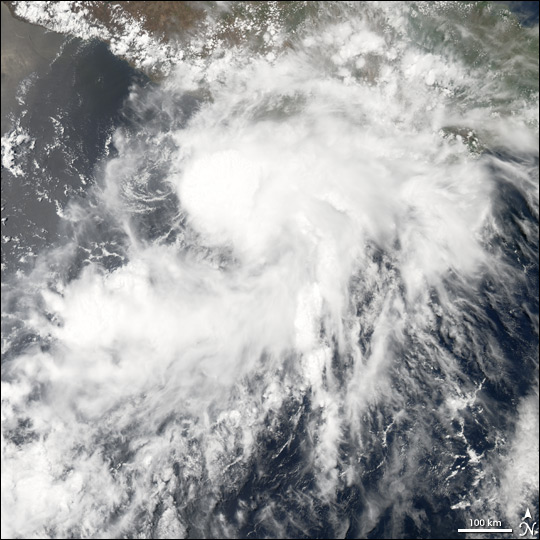 Tropical Storm Aletta formed off the Pacific coast of southern Mexico on May 27, 2006, as a tropical depression. Over the next day, it gained a little strength until it reached tropical storm status, with sustained winds of around 62 kilometers per hour (39 miles per hour). Aletta never built much beyond this strength before slipping back below storm strength to be a tropical depression on May 30. Aletta stayed offshore, which often happens with cyclones that form in the Eastern Pacific. However, Aletta did get to grab the tiara of the first named storm in the Eastern Pacific of the 2006 hurricane season.

This photo-like image was acquired by the Moderate Resolution Imaging Spectroradiometer (MODIS) on NASA’s Aqua satellite on May 27, 2006, at 3:05 p.m. local time (20:05 UTC). The tropical storm did have a discernable spiral structure in this satellite image, but other evidence of a well-developed storm system, such as an eye structure and tightly wound spiral arms, are absent. Sustained winds in the storm system were estimated to be around 65 kilometers per hour (40 miles per hour) around the time the image was captured, according to the University of Hawaii’s Tropical Storm Information Center.