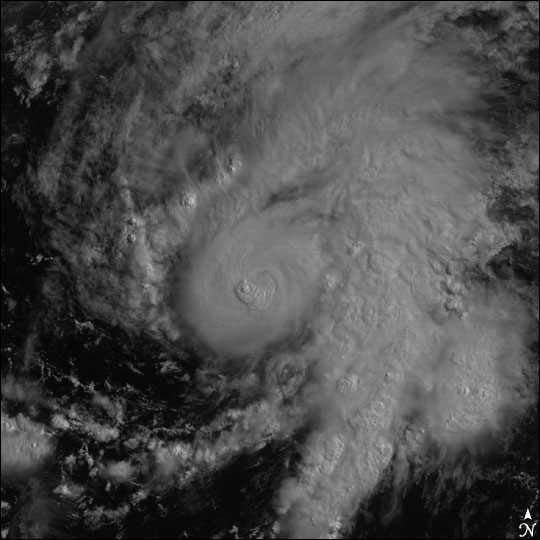 Tropical Storm Adrian is developing and moving steadily closer to the west coast of Central America. The storm is the first of the 2005 Pacific hurricane season, which runs from May 15 to November 30, and it has the potential to inundate Guatemala, El Salvador, and Honduras with heavy rains. These mountainous regions are prone to mudslides and flash floods. Adrian is not a powerful storm, but it has continued to intensify since it formed on May 17. The National Hurricane Center predicts that the storm may become a weak hurricane before it makes landfall late on May 19 or early on May 20.

This image of Tropical Storm Adrian was taken on May 19, 2005, by one of the GOES satellites. The GOES sensors maintain a constant watch over a particular section of the Earth to provide important weather information. As such, the GOES satellite can watch the development of the storm. The animation provided above shows the storm as it became more and more organized on May 18.

When it blows ashore, Adrian will become only the fifth tropical cyclone to make landfall over Guatemala or El Salvador since 1966, according to the National Hurricane Center. Of those storms, none has ever crossed Central America this early in May, making Adrian unusual.

Even more unusual than the timing of this storm is its path. Typically, hurricanes that form in the Eastern Pacific curve west to dissipate over the ocean, or they may move north into Mexico. Adrian is moving east and is expected to make landfall over El Salvador and Guatemala on May 19 or May 20. Its path is predicted to take it over the same region that was devastated by Hurricane Mitch in 1998. Unlike Adrian, Mitch formed in the Atlantic and crossed this section of Central America from the east. If Adrian survives its encounter with the high mountains of Central America, it could re-emerge in the Caribbean and move over Cuba and the Bahamas. While storms occasionally cross from the Atlantic into the Pacific, it is extremely rare for a storm to move into the Atlantic from the Pacific, however.