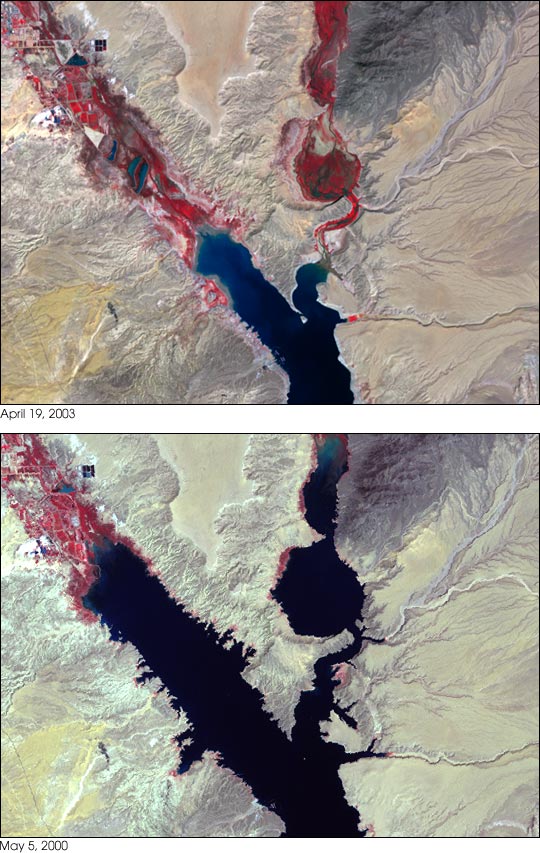 Since February of 1935, the Hoover Dam has been holding back the waters of the Colorado River, creating the largest reservoir in the United States— Lake Mead. Located at the northeast edge of the Mojave Desert, about 25 miles east of Las Vegas, Nevada, the enormous reservoir holds enough water to flood the entire state of New York under a foot of water.

The reservoir provides Colorado River water to places as far away as San Diego, California. The allocation of such a precious resource in such an arid region has been controversial for decades and will only become more so as human populations expand and demand increases. Recent years have brought severe drought to the American Southwest, creating a drop in lake levels that is visible from satellite.

Notice the dramatic difference in water levels in the river canyons feeding Lake Mead. Such a change is especially dramatic when you consider the fact that these lake-filled canyons are very narrow and deep. When lakes are narrow and deep, low water levels don’t change the surface area very much, and since satellites observe the surface, rather than the depth of the lake, changes can be hard to observe.

The image from 2000 comes from observations from the Landsat 7 Enhanced Thematic Mapper Plus instrument; the image from 2003 is from the Advanced Spaceborne Thermal Emission and Reflection Radiometer (ASTER) on the Terra satellite. The color scheme uses observations taken by the satellites in the near-infrared (the part of the electromagnetic spectrum with wavelengths just a little longer than red light) to make the difference between water, land, and vegetation very obvious.

This technique works because vegetation reflects near-infrared light very strongly, while water absorbs it. When used in the red “channel” of a digital image, near-infrared data will make vegetation appear very bright red, as it does in the former lake beds, and water will appear dark blue or black.