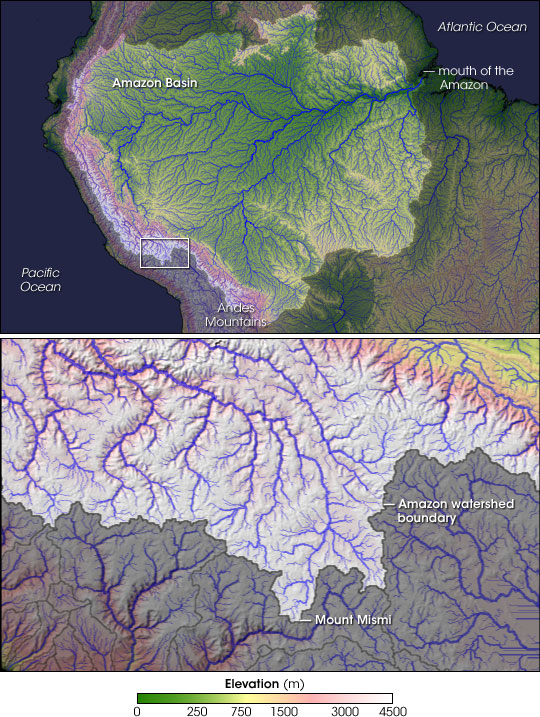 Geographers long agreed that, while the Amazon might be the world’s largest river by volume, the longest was likely the Nile. In 2007, however, the BBC reported that a team of Brazilian researchers challenged that long-held belief. After an expedition to Peru to locate the Amazon’s precise source, the team described a different starting point. The team claimed that the river originated not in northern Peru, where it had been thought to begin, but in southern Peru, somewhere on snowcapped Mount Mismi (or Nevado Mismi). The team narrowed down the starting point to one of two places, but concluded that either one would nudge the Amazon’s length past that of the Nile.

For clarity, the Amazon Basin and the watersheds feeding it appear bright, while the surrounding area appears darker. A white box outlines the region that the Brazilian researchers identified as the Amazon’s source; that area is enlarged in the bottom image. The larger image shows the rim of higher terrain along the western edge of the Amazon, where tributaries drain off mountain peaks in the Andes. A complicated network of riverbeds appears around Mount Mismi.

According to their new estimate, the Amazon is 6,800 kilometers (4,250 miles) long. The Nile is thought to be 6,695 kilometers (4,160 miles) long. As the BBC reported, assessing the exact length of a river can be difficult, and the calculation depends partly on identifying the river’s source. Before the announcement, the Nile had been regarded as only slightly longer than the Amazon, so this new finding was not shocking, but the Amazon’s new primacy in river length could face future challenges as both rivers continue to be explored.