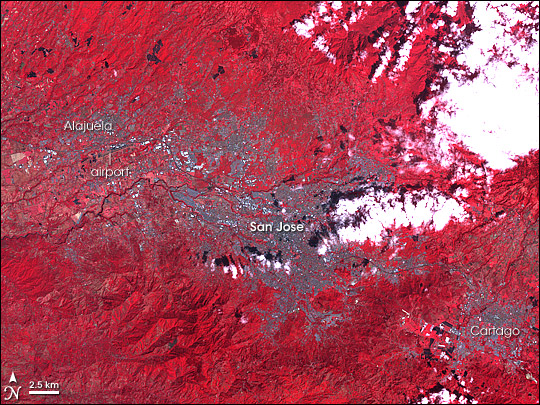 San José, capital city of Costa Rica, fills the valley between two steep mountain ranges. In this image made from data collected by the Advanced Spaceborne Thermal Emission and Reflection Radiometer (ASTER) instrument on NASA’s Terra satellite, visible, shortwave, and near-infrared wavelengths of light that the sensor observed have been combined to produce a false-color version of the scene in which vegetation is red, urban areas are silvery gray, water is dark blue, and clouds are white. The image was captured on February 8, 2007.

San José is in the center of the image. The Rio Torres winds through downtown San José. Cartago, the much smaller colonial capital, sits in the lower right corner, while the city of Alajuela appears across the river, northwest of San José. The cities’ manmade surfaces contrast sharply with the lushly vegetated landscape surrounding the city. Greenhouses are common in the region, and their glass roofs may be the brilliant white spots around the outer edges the cities. The long, straight runway of the Tobias Bolanos International Airport is visible as a dark line southeast of Alajuela.

The landscape around the two cities shown here is rugged. Steep mountain peaks cast dark shadows across their leeward slopes. Patches of dark red vegetation on the mountains north of San José may be rainforest. Coffee plantations also cover the slopes of the mountains around the city. February is the dry season in Costa Rica. During the rainy season, from about April to November, clouds usually block the satellite’s view of this tropical location.

You can download a 15-meter-resolution KMZ file of San José suitable for use with Google Earth.