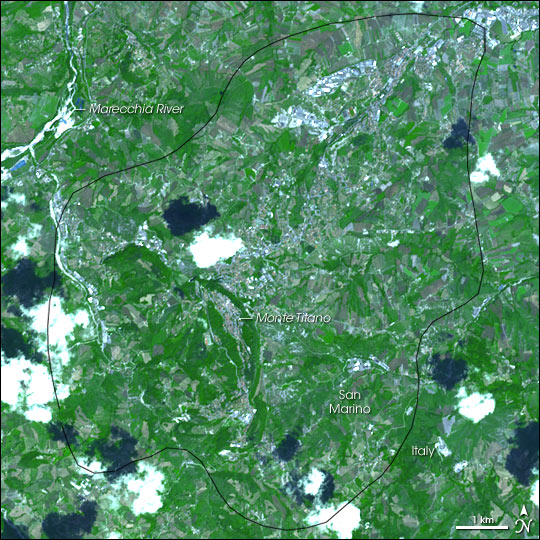 With an area of just 61 square kilometers (23.5 square miles), Serenissima Repubblica di San Marino (Italian for “Most Serene Republic of San Marino”) is the third-littlest country in Europe, behind Monaco and Vatican City. With a population of just over 28,000 as of January 2005, it is also one of the least populous nations in the world. Located in the northern part of the Italian Peninsula, near the Adriatic Sea, this tiny nation is surrounded by Italy.

On June 7, 2001, the Advanced Spaceborne Thermal Emission and Reflection Radiometer (ASTER) on NASA’s Terra satellite took this picture of San Marino and the part of Italy immediately surrounding it. The image shows a combination of vegetation (bright green); and buildings, pavement, and bare rock (blue-gray to white). Purplish-gray polygons are probably fallow agricultural land. Overhead, fluffy white clouds cast their charcoal-colored shadows over the land surface. The Apennine Mountains give the region a rough terrain, and the limestone Monte Titano dominates the area, with a fort perched on each of the mountain’s three summits.

According to legend, San Marino is the world’s oldest surviving republic, dating back to 301. The original city sits atop Monte Titano. Today, however, development has spread throughout the republic, evidenced by the many areas of blue-gray and the meandering roads. Tourism has brought prosperity to this small republic, but historically, its rugged terrain and lack of wealth may have helped it escape the unwanted attention of potential invaders.