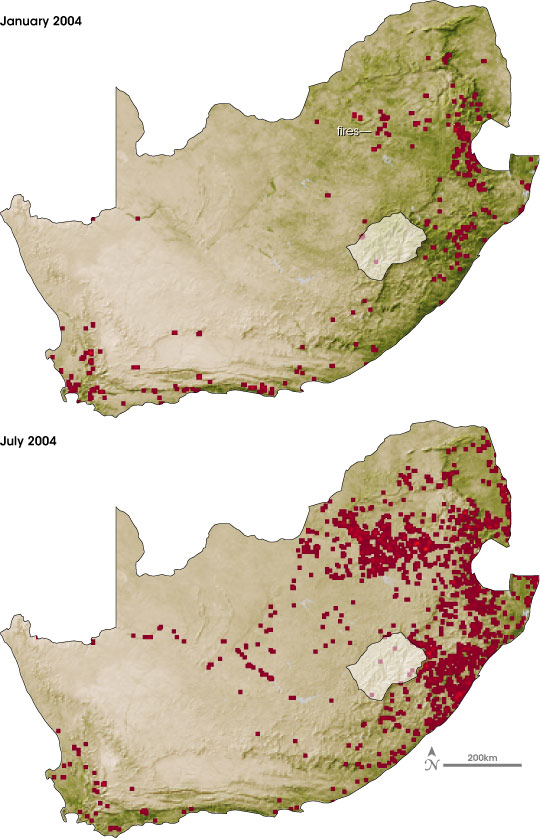 Even during the summer rainy season, when the soil is sodden and plants are green and growing, fire dots the South African landscape. During the summer (January), rains fall on the northern and eastern grasslands, but the Western Cape’s dry Mediterranean climate saps moisture from plants, turning them into tinder for flames. During the winter (July), the rain shifts south to the Cape and the northeastern grasslands turn warm and dry. It is during the winter that the most serious and extensive fires race across South Africa.

These seasonal trends are reflected in this pair of images, which show both vegetation conditions and fires for the months of January and July 2004. The vegetation and fire data come from the Moderate Resolution Imaging Spectroradiometer (MODIS) sensors on NASA’s Terra and Aqua satellites. During January, the summer rains turned the eastern half of South Africa green with growing plants. The Western Cape, dry during the summer, is mostly brown. In July, by contrast, the eastern savannah has dried up, and fewer plants are growing, as indicated by the tan tones. The Western Cape has greened up with the influx of winter rains. These vegetation conditions correlate well with the number of fires observed during January and July. Red dots indicate where MODIS detected fires during the month. The brighter red areas are places that experienced more frequent or longer lasting fires.

The frequency of fires throughout the year can pose a serious problem for South Africa’s power company. When fires burn underneath the lines, they can create a path through which electricity arcs to the ground. When this happens, automatic safety systems switch off the electricity running through the line. In a typical year, the power company has to find and fix between 70 and 150 fire-related outages. With 28,000 kilometers of line to check for faults, the problem is time-consuming and expensive. To help the company identify fires burning near power lines before an outage occurs, researcher Philip Frost of the South African Council for Scientific and Industrial Research set up a fire alert system using MODIS fire data such as the fire locations shown here. Whenever MODIS detects a fire within five kilometers of the transmission lines, the fire alert system automatically sends a cell phone text message to the technician in charge of that section of line. The alert gives the power company time to assess the severity of the fire and, if necessary, reroute electricity through back-up lines to prevent an outage.

To read more about the satellite-based fire alert system, please see Fire Alarms from Orbit, a feature article published on the Earth Observatory.

NASA image by Robert Simmon based on data from the University of Arizona Terrestrial Biophysics and Remote Sensing Lab and the MODIS Rapid Response System.