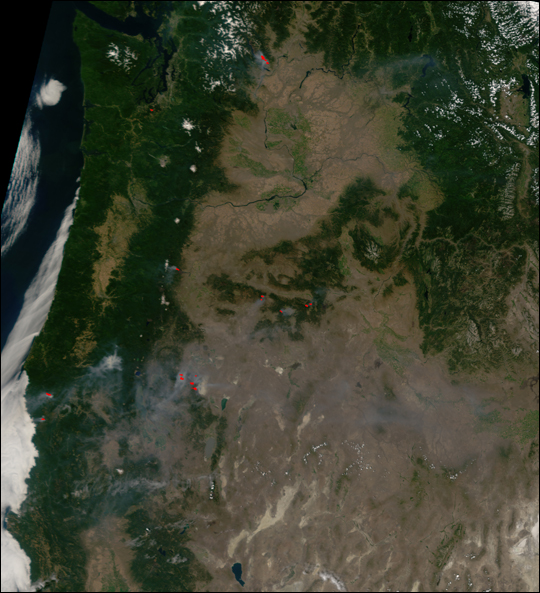 Two fires in south-central Oregon burned together over the weekend of July 20, 2002, and merged into a 50,000-acre blaze. The Silver Fire and Tool Box fires merged to create the massive fire, which according to news reports possessed at least one fire front nearly a mile long. This image of the fires (red dots) was acquired by the Moderate Resolution Imaging Spectroradiometer (MODIS) on July 21, 2002.

The cluster of multiple red dots in the south central portion of Oregon (southwest of center) indicates that the Tool Box Complex is now burning actively on multiple fronts, making the work of firefighters ever more challenging.

In addition to the region’s own firefighters, Army soldiers and National Guard personnel have been assigned to help battle the blaze, which is threatening a major power line as well as an ?extensive communications site,? according to reports from the National Interagency Fire Center.

Elsewhere in the region, other large fires were burning as well, including the Winter Fire to the immediate southeast of the Tool Box Complex, and the 22,000-acre Eyerly Fire to the north. In Washington (top), a 17,000-acre fire started by an unattended campfire has forced the evacuation of hundreds of people from the Lake Chelan area in the central part of the state. This fire is being called the Deer Point Fire.