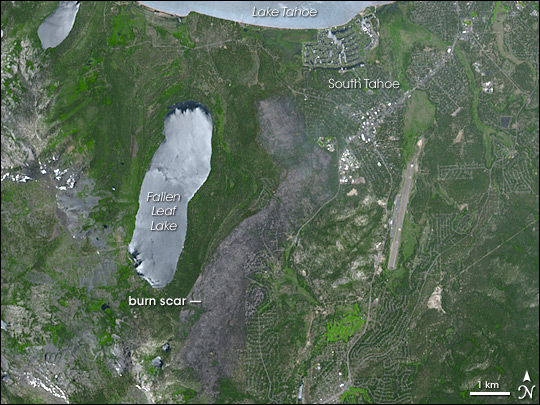 On the weekend of June 23, 2007, a wildfire broke out south of Lake Tahoe, which stretches across the California-Nevada border. By June 28, the Angora Fire had burned more than 200 homes and forced some 2,000 residents to evacuate, according to The Seattle Times and the Central Valley Business Times.

On June 27, the Advanced Spaceborne Thermal Emission and Reflection Radiometer (ASTER) on NASA’s Terra satellite captured this image of the burn scar left by the Angora fire. The burn scar is dark gray, or charcoal. Water bodies, including the southern tip of Lake Tahoe and Fallen Leaf Lake, are pale silvery blue, the silver color a result of sunlight reflecting off the surface of the water. Vegetation ranges in color from dark to bright green. Streets are light gray, and the customary pattern of meandering residential streets and cul-de-sacs appears throughout the image, including the area that burned. The burn scar shows where the fire obliterated some of the residential areas just east of Fallen Leaf Lake.

According to news reports, the U.S. Forest Service had expressed optimism about containing the fire within a week of the outbreak, but a few days after the fire started, it jumped a defense, forcing the evacuation of hundreds more residents. Strong winds that had been forecast for June 27, however, did not materialize, allowing firefighters to regain ground in controlling the blaze. On June 27, authorities hoped that the fire would be completely contained by July 3. According to estimates provided in the daily report from the National Interagency Fire Center, the fire had burned 3,100 acres (about 12.5 square kilometers) and was about 55 percent contained as of June 28. Some mandatory evacuations remained in effect.

You can download a 15-meter-resolution KMZ file of the Angora fire suitable for use with Google Earth.

More than 200 homes were destroyed in a fast-moving wildfire south of Lake Tahoe that started over the weekend of June 23, 2007.