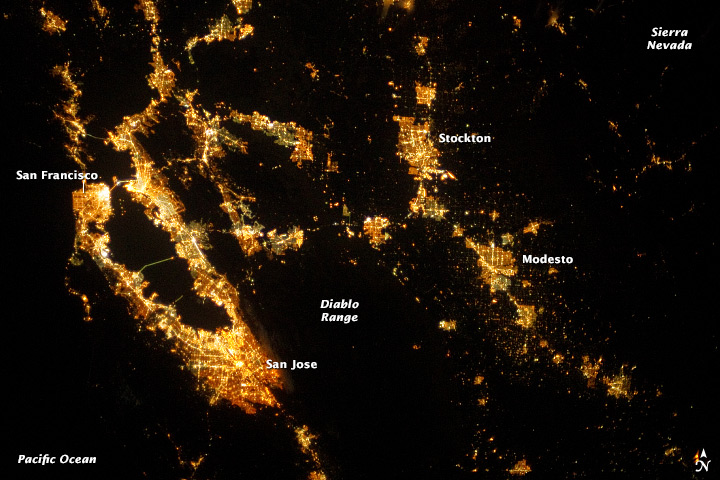 This photograph taken by an astronaut on the International Space Station highlights northern California from the city of San Francisco and San Francisco Bay along the coast to the cities of Stockton, Modesto, and the Sierra Nevada to the east.

At night, the city lights reflect some of the landscape controls that determine urban growth patterns in the region. The dark waters of San Francisco Bay are outlined by the lights of San Francisco, San Jose, and Oakland. Moving east and southeast from Oakland, the mountains of the Diablo Range present a largely dark region broken up by the lights of several smaller cities including Livermore, Walnut Creek, Concord, and Clayton (image center and top).

The city lights of Stockton and Modesto mark the northern end of the San Joaquin Valley, a part of the Central Valley of California that extends for approximately 720 kilometers (450 miles) northwest to southeast across much of the state. To the northeast of Modesto, city lights again become sparse in the mountains of the Sierra Nevada.

Astronaut photograph ISS037-E-2604 was acquired on September 25, 2013, with a Nikon D3S digital camera using a 50 millimeter lens, and is provided by the ISS Crew Earth Observations experiment and Image Science & Analysis Laboratory, Johnson Space Center. The image was taken by the Expedition 37 crew. It has been cropped and enhanced to improve contrast, and lens artifacts have been removed. The International Space Station Program supports the laboratory as part of the ISS National Lab to help astronauts take pictures of Earth that will be of the greatest value to scientists and the public, and to make those images freely available on the Internet. Additional images taken by astronauts and cosmonauts can be viewed at the NASA/JSC Gateway to Astronaut Photography of Earth. Caption by William L. Stefanov, Jacobs at NASA-JSC. 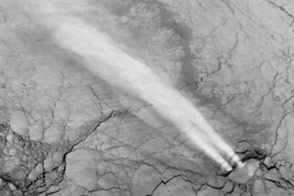 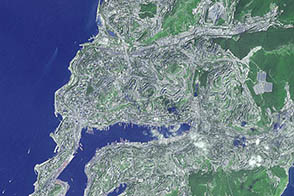 The Hills of Vladivostok