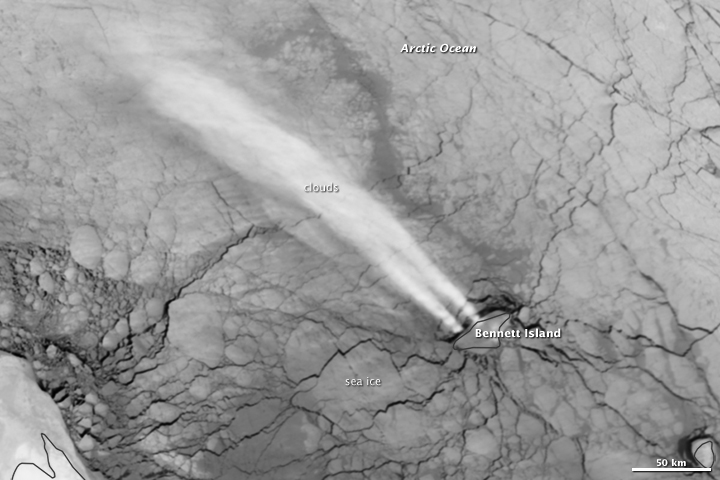 In the 1970s and 1980s, atmospheric scientists reviewing satellite images noticed an unusual phenomenon in the East Siberian Sea. Every few weeks, high clouds would stream away from a tiny island in Russian Arctic. The short-lived clouds not only stretched for hundreds of kilometers, they stretched away from just one side of Bennett Island (Ostrov Bennetta).

For 20 years, these clouds were a puzzle. Was methane gas (frozen gas hydrate) bubbling up from the sea floor? Or was there some clandestine military operation—such as weapons testing—in progress?

When a joint Russian-American research team flew over the area in 1992, they found an answer of greater interest to meteorologists than to military commanders. The clouds are formed when air flow over the tiny island is just right, sending moist air up to higher-than-usual altitudes.

The Visible Infrared Imaging Radiometer Suite (VIIRS) on the Suomi NPP satellite captured an image of Bennett Island cloud plumes on February 14, 2013. Rather than natural color, the image is a longwave infrared (thermal) view that depicts the relative heat of the water, ice, and rising air. Cooler areas (sea ice) appear gray-white, while warmer areas (open water) are dark. The brightest white is the cloud plume, as the moist, rising air is cooled significantly by cold Arctic winds that are well below the 0°C (32°F) of the ice and open water. At the time of the satellite pass, winds were blowing at 10 to 20 knots (11 to 23 miles per hour).

Situated well north of the Arctic Circle (76.5° North, 149° East), Bennett Island rises 420 meters (1,400 feet) above sea level. That little bump in the otherwise flat and icy Arctic Ocean is enough to disturb air flow in the area. When winds blow out of the southeast, moist air near the surface is ramped up into the atmosphere, which is highly layered, or stratified. The bump in the lowest layer can create waves propagating up into even higher layers. Rising, moist air reaches cold, dry upper layers and condenses into cloud-forming ice crystals about three kilometers (10,000 feet) above the surface.