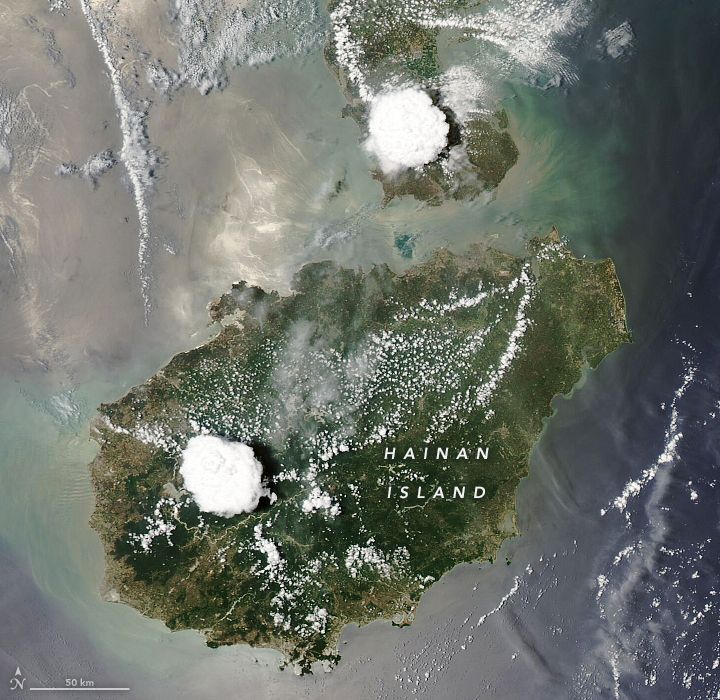 Spend time on China’s Hainan Island, and chances are good that you will witness a lightning storm. Hainan and neighboring Guangdong province have the highest density of cloud-to-ground flashes and the most lightning related casualties in the country.

The clouds that frequently produce such severe weather—cumulonimbus—are seen building up during the afternoon. The image (top) was acquired at 2 p.m. China Standard Time (06:00 Universal Time) on May 11, 2020, with the Moderate Resolution Imaging Spectroradiometer (MODIS) on NASA’s Aqua satellite. The time-series animation shows the growth of the clouds over the course of the day, as observed by Japan’s Himawari-8 satellite.

“It’s definitely a cumulonimbus cloud,” said Paul Markowski, a professor of meteorology at Pennsylvania State University. “And it’s sitting over the highest terrain in the center of the island.”

The south-central part of the island is mountainous, with elevations of more than 1800 meters (5,900 feet) surrounded by plains extending to the island’s northeast. The rugged topography creates orographic lift: when air moves across the plains and encounters the mountains, it is forced upward. So, when moist ocean air moves from low to high elevations, it cools and condenses into clouds.

The terrain enhances the convection. But even if the island were completely flat, cumulonimbus could still develop, as the collision of air masses also forces air upward. Starting in the morning, the Sun quickly heats up the land and warms the air above it. The warm air rises it leaves behind a pocket of low pressure. Air within high pressure areas over the ocean moves in to fill the void, producing an onshore wind known as a “sea breeze.”

As the cool, moist air from over the South China Sea moves toward the island’s interior, it can collide with warm air along the sea breeze front. The cool air forces the less dense warm air to rapidly rise, producing the vertical towers of clouds. Convection can be particularly intense in areas where sea breezes from opposite sides of the island ultimately collide.

The whole process takes time, which explains why the storm clouds tend to develop in the afternoon. For example, similar clouds show up in the afternoon of May 10. In contrast, images from the mornings of May 10 and May 11 show cumulus-free skies.