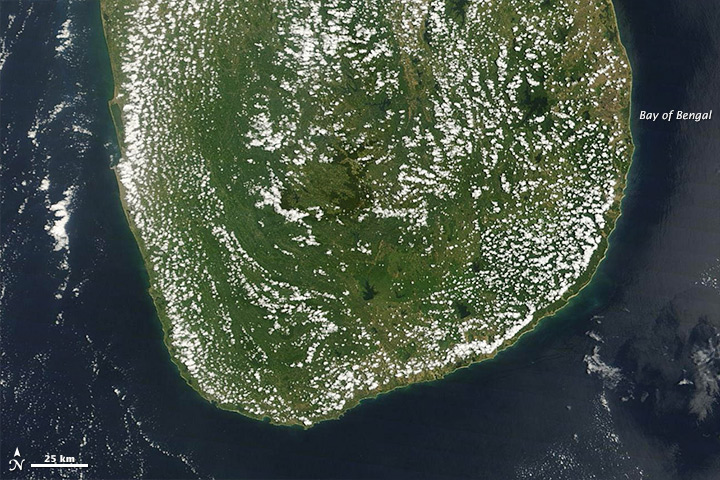 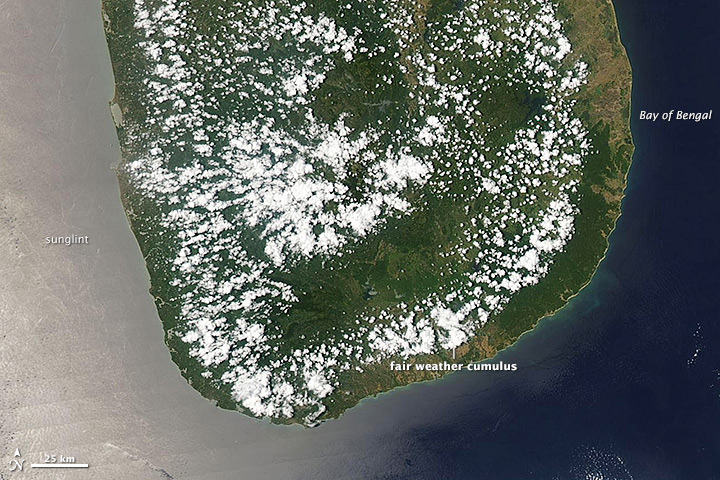 On April 9, 2013, the Moderate Resolution Imaging Spectroradiometers (MODIS) on NASA’s Aqua and Terra satellites captured images of clouds developing over Sri Lanka in the span of a few hours around midday.

The white clouds over this Indian Ocean island are known as cumulus humilis, or fair-weather cumulus clouds. They are mostly composed of liquid water and can last between five and forty minutes. The clouds have flat bottoms, rounded tops, are not very tall; the tops of the clouds (usually no more than 3,000 meters or 10,000 feet) indicate the limit of the rising air. Cumulus humilis usually have a longer horizontal length and less height than cumulus congestus, or foul-weather clouds, which grow taller.

The top image, captured by Terra around 10:30 a.m. local time (15:30 Universal Time), shows a number of the flattened, cotton-like cumulus humilis clouds. By the time Aqua passed over Sri Lanka around 1:30 p.m. (18:30 UTC), more clouds covered the island. (The silvery water to the west of the island is sunglint, the mirror-like reflection of sunlight back toward the satellite sensor.) The difference in the clouds can be attributed to the sea breeze effect, a pattern of air flow from sea to land.

Land and water both absorb the Sun’s energy. However, the air over land heats up much faster than the air over water, so the land air rises and creates a low-pressure area. The air over the water gusts into the low-pressure area over land, creating a sea breeze. As this humid ocean air moves inland, it combines with the rising land air masses, begins to condense, and forms clouds. The sea breeze effect is stronger when the Sun is highest in the sky and temperatures are the hotter in the afternoon, leading to more cloud formation later in the day.

NASA images by Rob Simmon, based on data from the LANCE/EOSDIS MODIS Rapid Response Team at NASA GSFC. Caption by Kasha Patel.

Image of the Day Atmosphere Land Water World of Change 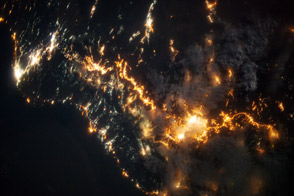