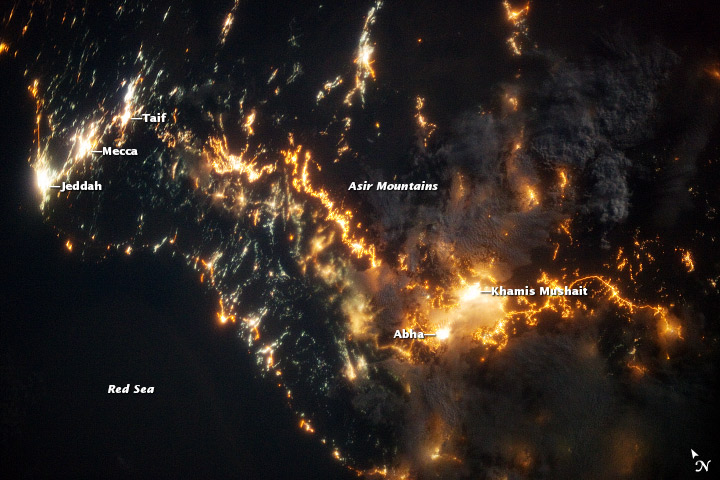 This striking image of the coastline of southwestern Saudi Arabia was taken by astronauts on the International Space Station. Patchy cloud cover partially obscures and blurs the city lights, especially in the vicinity of Khamis Mushait and Abha.

While much of the country is lightly populated desert—and relatively dark at night due to lack of city and roadway lights—the southwestern coastal region has a more moderate climate and several large cities. Three brightly lit urban centers are visible at image top left: Jeddah, Mecca, and Taif. Jeddah is the gateway city for Islamic pilgrims going to nearby Mecca, a religious journey known as the Hajj. Taif is located on the slopes of the Sarawat Mountains and provides a summer retreat for the Saudi government from the desert heat of the capital, Riyadh.

Bright yellow-orange lighting marks highways that parallel the trend of the Asir Mountains (image center), connecting Mecca to the resort cities of Al Bahah and Abha. Smaller roadways, lit with blue lights, extend to the west to small cities along the Red Sea coastline. The bright yellow-orange glow of the city of Abha is matched by that of Khamis Mushait (or Khamis Mushayt) to the northeast. The brightly lit ribbon of highway continues towards other large cities to the south (Jazan, not shown) and southeast (Najran, not shown).

Astronaut photograph ISS036-E-25802 was acquired on July 26, 2013, with a Nikon D3S digital camera using a 50 millimeter lens, and is provided by the ISS Crew Earth Observations experiment and Image Science & Analysis Laboratory, Johnson Space Center. The image was taken by the Expedition 36 crew. It has been cropped and enhanced to improve contrast, and lens artifacts have been removed. The International Space Station Program supports the laboratory as part of the ISS National Lab to help astronauts take pictures of Earth that will be of the greatest value to scientists and the public, and to make those images freely available on the Internet. Additional images taken by astronauts and cosmonauts can be viewed at the NASA/JSC Gateway to Astronaut Photography of Earth. Caption by William L. Stefanov, Jacobs/JETS at NASA-JSC.

Coastal cities flourish amidst a more moderate climate along the Red Sea.