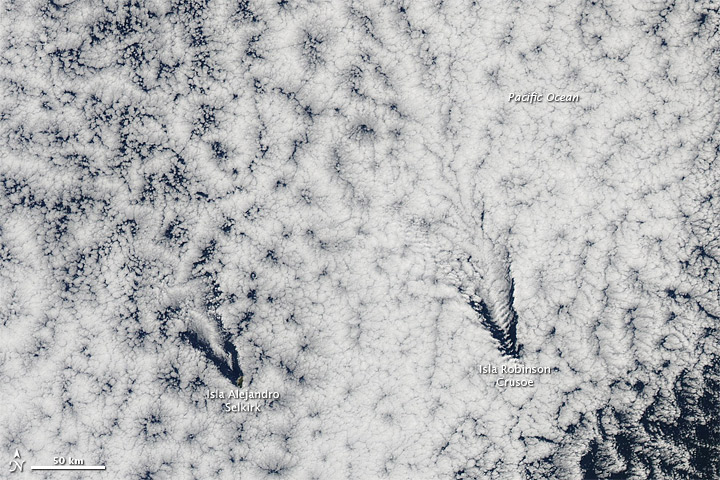 Two small islands produced big effects in the atmosphere off of Chile in late April 2011. The Moderate Resolution Imaging Spectroradiometer (MODIS) on NASA’s Aqua satellite captured this natural-color image of the Juan Fernandez Islands on April 29.

Isla Alejandro Selkirk and Isla Robinson Crusoe are both volcanic islands arising from an east-west submarine ridge. The islands are barely visible in this image, but their effects on nearby clouds are obvious. Poking up from the ocean surface, the islands create obstacles to air movement, such that wind blowing over each island creates a giant V shape of cloud-free air, with the island at the base.

Isla Alejandro Selkirk appears to simply interrupt the regional cloud pattern, which resumes north of the island. But the effects of Isla Robinson Crusoe appear more complex. Close to the island, the clouds look similar to lenticular clouds that formed around Amsterdam Island in December 2005.

Clouds often form in rising air, and evaporate in falling air. While moist air may produce uniform clouds, and dry air may produce no clouds, alternating layers of humid and dry air can produce lens-shaped clouds. Farther away from the island, the clouds roughly resemble von Karman vortices—paisley-like patterns created by eddies.