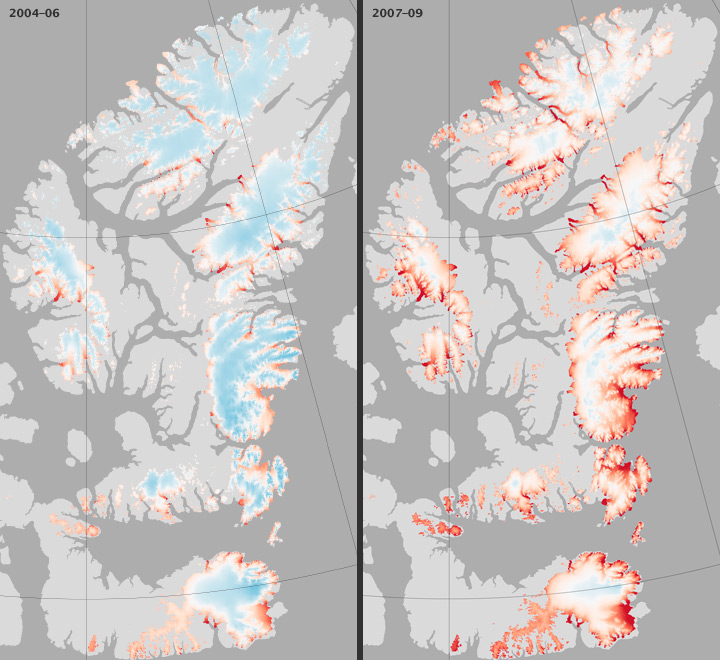 Though much attention has been focused in recent years on the melting of ice from Greenland and Antarctica, nearly half of the ice volume currently being lost to the ocean is actually coming from other mountain glaciers and ice caps. Ice loss from a group of islands in northern Canada accounts for much of that volume.

In a study published in April 2011 in the journal Nature, a team of researchers led by Alex Gardner of the University of Michigan found that land ice in both the northern and southern Canadian Arctic Archipelago has declined sharply. The maps above show ice loss from surface melting for the northern portion of the archipelago from 2004–2006 (left) and 2007–2009 (right). Blue indicates ice gain, and red indicates ice loss.

In the six years studied, the Canadian Arctic Archipelago lost an average of approximately 61 gigatons of ice per year. (A gigaton is a billion tons of ice.) The research team also found the rate of ice loss was accelerating. From 2004 to 2006, the average mass loss was roughly 31 gigatons per year; from 2007 to 2009, the loss increased to 92 gigatons per year.

Gardner and colleagues used three independent methods to assess ice mass, all of which showed the same trends. The team used a model to estimate the surface mass balance of ice and the amount of ice discharged. They also compiled and analyzed measurements from NASA’s Ice, Cloud and Land Elevation Satellite (ICESat) to assess changes in the surface height of ice. Finally, they gathered observations from NASA’s Gravity Recovery and Climate Experiment (GRACE) to determine changes in the gravity field in the region, an indicator of the amount of ice gained or lost.

The Canadian Arctic Archipelago generally receives little precipitation, and the amount of snowfall changes little from year to year. But the rate of snow and ice melting varies considerably, so changes in ice mass come largely from changes in summertime melt. During the 2004 to 2009 study period, the Canadian Arctic Archipelago experienced four of its five warmest years since 1960, likely fueling the melting.