Growth of a Summer Storm 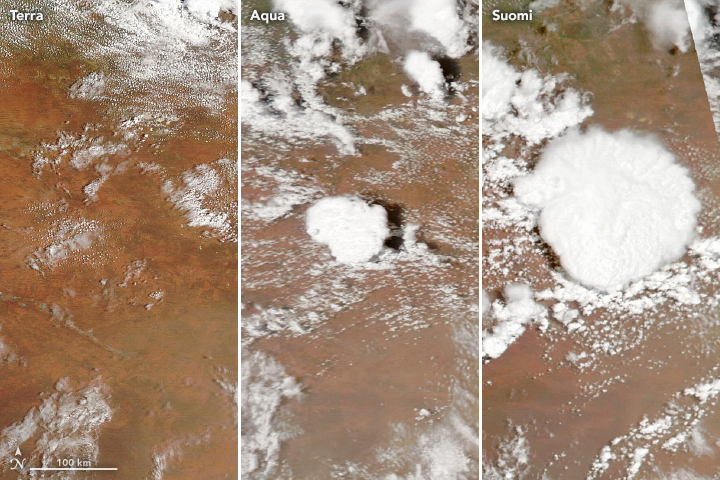 Afternoon storms are a typical phenomenon during summertime in Australia. They are a reminder that everyday natural events can be strikingly beautiful.

These images show the evolution of a storm over Western Australia on January 14, 2020. Morning skies appear clear in the left image, acquired around 11 a.m. local time. The storm starts growing in the afternoon at about 1 p.m. (middle) and even larger an hour later (right image). The natural-color images were acquired (from left to right) with the Moderate Resolution Imaging Spectroradiometer (MODIS) on NASA’s Terra satellite; MODIS on NASA’s Aqua satellite, and the Visible Infrared Imaging Radiometer Suite (VIIRS) on the NOAA-NASA Suomi NPP satellite.

According to Bastiaan Van Diedenhoven, a researcher for Columbia University and NASA’s Goddard Institute for Space Studies, the cloud is a cumulonimbus—a type capable of producing thunderstorms and heavy rain.

“Afternoon storms form often in the Austral summer as the land heats up, leading the air to rise and condense into clouds,” Van Diedenhoven said. “The storm looks very round from the top probably because there’s not much wind shear. When the top reaches its highest point near the tropopause, its top will expand horizontally.”

While clouds like this are normal, they don’t turn up too often in MODIS or VIIRS imagery. The clouds usually grow large later in the afternoon, after the satellites have passed over and acquired their once-a-day imagery. Satellites with a geostationary orbit—giving a constant view of an area—can more easily capture full weather events. Watch the cumulonimbus evolve in this animation of images from Japan’s Himawari-8 satellite.

Earlier in the week, thunderstorms had developed as a result Tropical Cyclone Claudia, which spun off the coast of Western Australia. And to the east, areas that previously saw thunderstorms triggered by the bush fires are now seeing the more typical type of thunderstorms, providing much-needed rain to the area.

The cumulonimbus above, however, was likely just a typical summer storm. Van Diedenhoven noted: “The cyclone or the fires should have nothing to do with it.”

Afternoon thunderstorms are a typical phenomenon during summer in Western Australia.