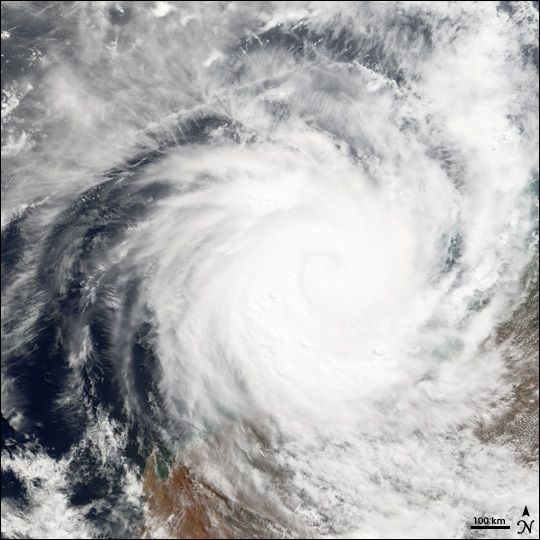 Tropical Cyclone Glenda formed off the northwestern coast of Australia on March 27, 2006. The storm quickly built into a powerful and well-defined cyclone during the next day. Powerful winds have whipped up surf along the coastline of Western Australia’s Pilbara region and brought powerful winds and rain to the islands off the Kimberly coast. As of March 29, 2006, the storm had reached Category 5 status, the maximum rating possible for a cyclone.

This photo-like image was acquired by the Moderate Resolution Imaging Spectroradiometer (MODIS) on the Terra satellite on March 29, 2006, at 10:40 a.m. local time (02:40 UTC). It shows Cyclone Glenda as a well-developed storm, sitting 525 kilometers (330 miles) west of Broome. Clouds from the storm covered most of the northwest coastline of Western Australia. Sustained, peak winds in the storm system were roughly 220 kilometers per hour (140 miles per hour) at this time. The storm’s spiraling clouds appear as a nearly solid white disk, but in several places, it appears as though some clouds are “boiling” up above the rest.

Predictions as of 2:55 a.m. Australian Western Standard Time on March 30 were that the storm would cross the coast between Exmouth and Karatha on Thursday afternoon or night as a very dangerous storm. The Australian Bureau of Meteorology predicted that wind speeds near the storm center could reach 265 kilometers per hour (165 miles per hour) as the storm comes ashore. Many coastal communities were being evacuated by State Emergency Services ahead of the storm.