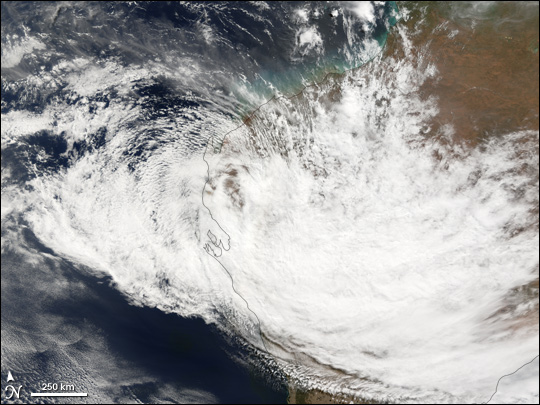 Tropical Cyclone Glenda formed off the northwestern coast of Australia on March 27, 2006. Powerful winds whipped up surf along the coastline of Western Australia’s Pilbara region, and the storm brought heavy rains to the islands off the Kimberly coast. On March 29, it was classified as a Category 5 storm, the highest rating on the cyclone-strength scale. However, as it came ashore a day later, it had lost a small fraction of its strength. By March 31, 2006, the storm had lost considerable power and was ranked as a mere tropical depression.

This photo-like image was acquired by the Moderate Resolution Imaging Spectrometer (MODIS) on the Terra satellite on March 31, 2006, at 10:30 a.m. local time (02:30 UTC), roughly 40 hours after coming ashore near Onslow. The remnants of Cyclone Glenda still have a vaguely spiral appearance, but they lack the well-developed eye and tight-wound shape of the mature, powerful storm of previous days. Clouds from the storm cover most of the Indian Ocean coast of Western Australia. Sustained, peak winds in the storm system were considerably diminished, roughly 65 kilometers per hour (40 miles per hour) around the time the image was captured.

Damage assessments in Onslow showed the town fared better than expected in the face of such a powerful storm. However, it will be many days before clean-up operations are concluded. Meteorologists were also concerned about the widespread flooding potential as the storm continued to travel inland.