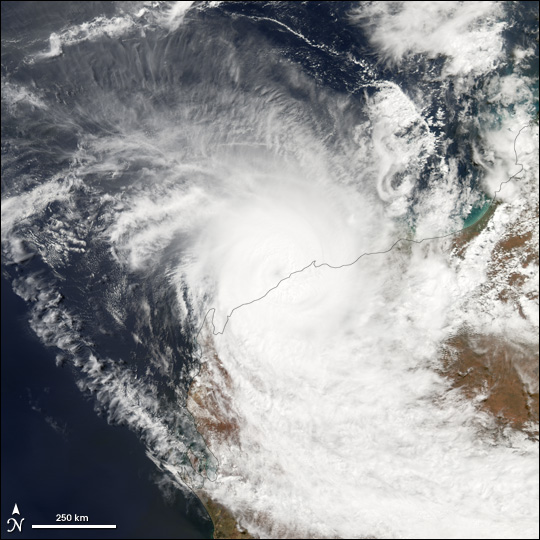 Tropical Cyclone Glenda formed off the northwestern coast of Australia on March 27, 2006. The storm quickly built into a powerful and well-defined cyclone during the next day. Powerful winds have whipped up surf along the coastline of Western Australia’s Pilbara region, and the storm has brought heavy rains to the islands off the Kimberly coast. As of March 30, 2006, the storm had lost some power and was ranked as a powerful Category 4 storm, after having peaked the previous day.

This photo-like image was acquired by the Moderate Resolution Imaging Spectrometer (MODIS) on the Aqua satellite on March 30, 2006, at 2:10 p.m. local time (06:10 UTC). It shows Cyclone Glenda as a well-developed storm, sitting just off the coastline about 300 kilometers (185 miles) from Port Hedland. Clouds from the storm covered most of the northwest coastline of Western Australia. Sustained, peak winds in the storm system were roughly 195 kilometers per hour (120 miles per hour) at this time. The storm’s spiraling clouds appear as a nearly solid white disk, and the faint bluish eye is poised just off the coastline.

Observations as of 8:00 p.m. Australian Western Standard Time on March 30 were that the storm was crossing the coast near Onslow. The town was bearing the brunt of the worst winds near the cyclone’s center. The Australian Bureau of Meteorology predicted that wind speeds could gust as high as 235 kilometers per hour (140 miles per hour) as the storm continued to come ashore. Residents in coastal communities who were not yet evacuated were directed to stay put, as the severe winds would make attempting to move extremely dangerous.

Australian news services are comparing Glenda to the famous and destructive cyclones Larry and Tracy. Larry struck the Queensland coast just two weeks before Glenda, while Tracy remains imprinted on Australia’s memory as the storm that flattened Darwin on Christmas Eve 1974. Glenda is large and more powerful than either of these storms, but striking in a much more sparsely populated area.