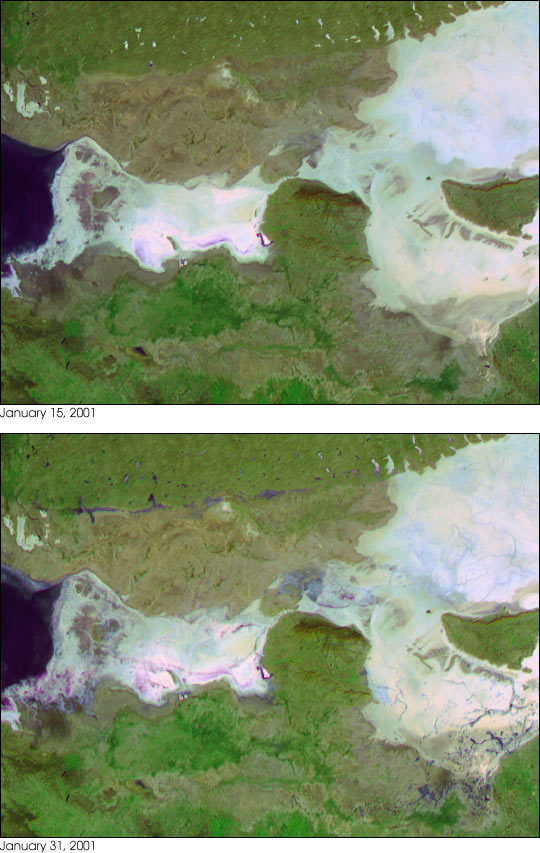 On January 26, 2001, when India’s Republic Day is normally celebrated, a devastating earthquake hit the state of Gujarat. About 20,000 people died and millions were injured throughout the region. The earthquake had a magnitude of 7.7 on the Richter scale. After the earthquake, local residents reported a mixture of water and sediments fountaining from the Earth. These effects, referred to as dewatering, can result from intense ground shaking by strong earthquakes in regions with shallow water tables. Scientists initially observed dewatering in parts of the Rann of Kutch (a large salt pan in northern Gujarat), and in areas close to the earthquake epicenter. Recent research utilizes the unique capabilities of the Multi-angle Imaging SpectroRadiometer (MISR) instrument to observe earthquake-related dewatering over a broader area (related story: NASA Satellite Helps Scientists See Effects of Earthquakes in Remote Areas). This research is published in the February 4, 2003, issue of EOS Transactions of the American Geophysical Union.

These two false-color MISR images were acquired before and after the event, on January 15 and 31, respectively. The earthquake epicenter was located about 80 kilometers east of the city of Bhuj, situated in the lower part of the images. The later image depicts numerous areas where groundwater flowed up to the surface, including within the Rann of Kutch, as well as near the Indo-Pakistani border. These regions of earthquake-associated surface water are apparent up to 200 kilometers from the earthquake’s epicenter. Water was observed in many remote areas, especially near the Indo-Pakistani border, which were not easily accessible to survey teams on the ground.

Changes in reflection at different view angles and in the near-infrared spectral region assist with the identification of surface water, which appears here in shades of blue and purple. In these visualizations, data from the red band of MISR’s most obliquely backward and forward-viewing cameras are displayed as red and blue, respectively, and data from the near-infrared band of MISR’s vertically-downward viewing (nadir) camera are displayed as green. Water bodies tend to be more absorbing in the near-infrared, and to be brighter in the view acquired by the more sun-facing (in this case, the 70-degree forward) camera. This combination enhances the ability to distinguish wet surfaces. True color and multi-angle visualizations of these data were also released in April 2001.

The Multi-angle Imaging SpectroRadiometer observes the daylit Earth continuously and every 9 days views the entire globe between 82 degrees north and 82 degrees south latitude. The MISR Browse Image Viewer provides access to low-resolution true-color versions of these images. This data product was generated from a portion of the imagery acquired during Terra orbits 5736 and 5969. The full-size images cover an area of 215 kilometers x 156 kilometers, and utilize data from blocks 71 to 72 within World Reference System-2 path 151.