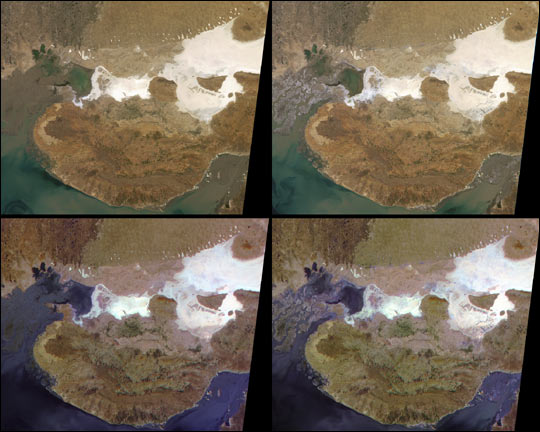 These Multi-angle Imaging Spectroradiometer (MISR) images show the Kachchh region in the Gujarat province of western India. On January 26, 2001, a magnitude 7.7 earthquake devastated this area, killing 20,000 people and destroying buildings, dams, and port facilities. The two upper MISR images are pre- and post-earthquake scenes acquired on January 15 and January 31, 2001, respectively. They are "true-color" images made by combining the red, green and blue bands from the nadir (vertically down-looking) camera. The two lower views are "false-color" images made by combining the red bands from three different cameras. Blue is assigned to the camera pointing 70 degrees forward (more sun-facing), green to the nadir camera, and red to the camera pointing 70 degrees aftward. Each of these images is about 275 kilometers wide by 218 kilometers high.

The earthquake epicenter was just below the southern tip of the large, white area on the right-hand side of the images, and about 70 kilometers northeast of the city of Bhuj. The earthquake may have occurred on the Kachchh Mainland Fault, which extends from the region of the epicenter westward along the curved boundary between the darker brown region to the south and the lighter brown area north of it. The compressive stresses responsible for the earthquake are related to the collision of India with Asia and the resulting rise of the Himalayas to the northeast.

That part of the Kachchh region which lies north of the Kachchh Mainland Fault includes the Banni Plains and the Rann of Kachchh. It is a low, flat basin characterized by salt pans and mud flats. The salt forms in the Rann of Kachchh as mineral-laden waters evaporate. The salt flats can be seen in the nadir images as highly reflective, white and gray areas. During the earthquake, strong shaking produced liquefaction in the fine silts and sands below the water table in the Rann of Kachchh. This caused the mineral grains to settle and expel their interstitial water to the surface. Field investigations have found abundant evidence of mud volcanos, sand boils, and fissures from which salty ground water erupted over an area exceeding 10,000 square kilometers. Evidence of the expelled water can also be seen on the MISR images.

Notice the delicate, dendritic pattern of stream channels throughout many of the salt-flats on the post-earthquake image, especially due north of the epicenter. These carried water brought to the surface by liquefaction during the earthquake. Areas where shallow surface water is present are much easier to see on the false-color multi-angle composite images. Wet areas are exhibiting a combination of enhanced forward-scattered light due to the reflection by the water, and enhanced backward scattering due to surface roughness or the presence of sediments. This combination results in blue to purple hues.

The region of sand dunes in the upper right and the Indus River valley and delta in the upper left are inside Pakistan. Near the top of the images, there is an east-west trending linear feature separating the Thar desert of Pakistan from the Rann of Kachchh. This is the Nagar Parkar Fault. On both pre-earthquake images, this feature is evident only from the contrasting brown colors on either side of it. On the post-earthquake images, a narrow ribbon defines the boundary between the two geologic provinces. However, only in the multi-angle composite do we see evidence that this ribbon may be a water-filled channel. Because this area is politically sensitive and fairly inaccessible, no field teams have been able to verify liquefaction effects or the presence of water there.