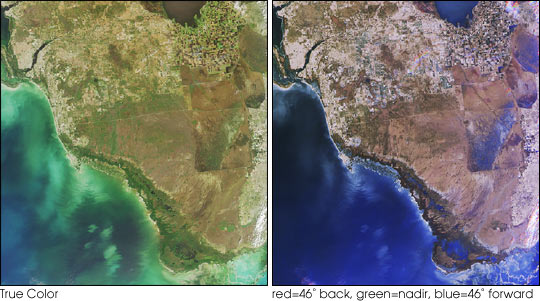 Florida’s Everglades is a region of broad, slow-moving sheets of water flowing southward over low-lying areas from Lake Okeechobee to the Gulf of Mexico. In places this remarkable ‘river of grass’ is 80 kilometers wide. These images from the Multi-angle Imaging SpectroRadiometer show the Everglades region on January 16, 2002. Each image covers an area measuring 191 kilometers x 205 kilometers.

On the left is a natural color view acquired by MISR’s nadir camera. A portion of Lake Okeechobee is visible at the top, to the right of image center. South of the lake, whose name derives from the Seminole word for ‘big water,’ an extensive region of farmland known as the Everglades Agricultural Area is recognizable by its many clustered squares. Over half of the sugar produced in United States is grown here. Urban areas along the east coast and in the northern part of the image extend to the boundaries of Big Cypress Swamp, situated north of Everglades National Park.

The image on the right combines red-band data from the 46-degree backward, nadir and 46-degree forward-viewing camera angles to create a red, green, blue false-color composite. One of the interesting uses of the composite image is for detecting surface water. Wet surfaces appear blue in this rendition because sun glitter produces a greater signal at the forward camera’s view angle. Wetlands visible in these images include a series of shallow impoundments called Water Conservation Areas which were built to speed water flow through the Everglades in times of drought. In parts of the Everglades, these levees and extensive systems such as the Miami and Tamiami Canals have altered the natural cycles of water flow. For example, the water volume of the Shark River Slough, a natural wetland which feeds Everglades National Park, is influenced by the Tamiami Canal. The unique and intrinsic value of the Everglades is now widely recognized, and efforts to restore the natural water cycles are underway.