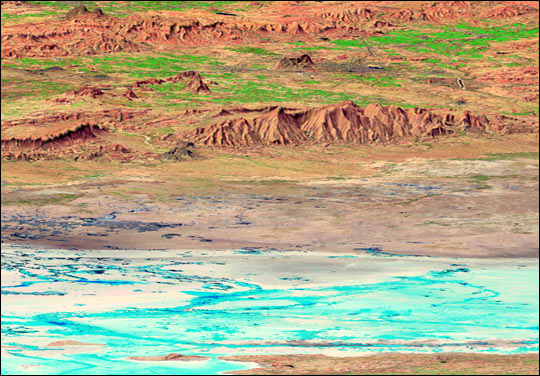 The earthquake that struck western India on January 26, 2001, was the country's strongest in the past 50 years. This perspective view shows the area of the earthquake's epicenter in the lower left corner. The southern Rann of Kachchh appears in the foreground. The Rann is an area of low-lying salt flats that shows up with various shades of white and blue in this false-color Landsat image. The gray area on the middle of the image is called the Banni plains.

The darker blue spots and curving lines in the Rann and the Banni plains are features that appeared after the January earthquake. Their true colors are shades of white and gray, but the infrared data used in the image gives them a blue or turquoise color. These features are the effects of liquefaction of wet soil, sand and mud layers caused by the shaking of the earthquake. The liquefaction beneath the surface causes water to be squeezed out at the surface forming mud volcanoes, sand blows and temporary springs. Some of the residents of this dry area were hopeful that they could use the water, but they found that the water was too salty in almost every place where it came to the surface.

The city of Bhuj, India, appears as a gray area in the upper right of the image. Bhuj and many other towns and cities nearby were almost completely destroyed by the January 2001 earthquake. This magnitude 7.7 earthquake was the deadliest in the history of India with some 20,000 fatalities and over a million homes damaged or destroyed. The city of Bhuj was the historical capital of the Kachchh region. Highways and rivers appear as dark lines. Vegetation appears bright green in this false-color Landsat image.

The city of Anjar is in the dark gray area near the upper left of the image. Previously damaged by a magnitude 6.1 earthquake in 1956 that killed 152 people, Anjar suffered again in the larger 2001 earthquake. The red hills in the center of the image are the Has and Karo Hills, which reach up to 300 m (900 feet) elevation. Geologists are studying the folded red sandstone layers that form these hills to determine if they are related to the fault that broke in the 2001 earthquake.

This three-dimensional perspective view was generated using topographic data from the Shuttle Radar Topography Mission (SRTM) and an enhanced false-color Landsat 7 satellite image. Colors are from Landsat bands 5, 4, and 2 as red, green and blue, respectively. Topographic expression is exaggerated 5X.