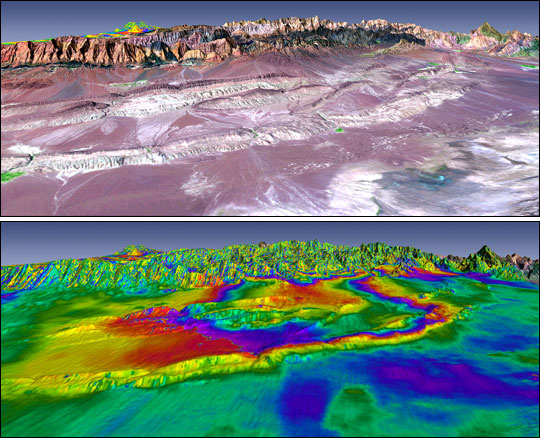 A magnitude 6.6 earthquake struck a sparsely inhabited area of southeast Iran on March 14, 1998, at 11:10 p.m. local time. While using satellite-based radar data to study the fault rupture of the 1998 earthquake, a team of scientists from the United States and the United Kingdom discovered that a second fault 10 to 30 kilometers (6 to 19 miles) to the east of the primary fault also moved in the six months after the quake. Named after a nearby town, the Shahdad Thrust Fault did not cause any detectable seismic waves when it slipped after the 1998 quake, and so scientists refer to the event as aseismic, or a “silent earthquake.”

The two images above show a three-dimensional view of the region affected by the 1998 quake. The images cover an area roughly 50 kilometers (30 miles) wide, and they are displayed with North along the right edge. (Imagine you are standing on the ground at the bottom of the image looking due west.) The image on top shows the region’s surface geology, while the image on the bottom shows where the event deformed the surface.

The light gray linear features running from lower left to upper right across the top image are small ridges that are related to the Shahdad Fault. The rainbow colors in the bottom image show contours of the motion of the surface. The big loops in red tones sweeping out across the low ridges show where the Shahdad Fault slipped eastward (toward you as you are standing at the bottom of the image) in the six months after the main earthquake. The top image was made from Landsat satellite data, while the bottom image is the result of the scientists’ analysis of radar data collected by the European Remote Sensing (ERS) satellites.

The March 1998 earthquake struck a valley on the other side of the mountains in the background of this view. Calculations of the transfer of stress in the Earth indicate that the earthquake probably caused the slip on the Shahdad Fault, and that the additional stresses were released by the “silent” slip. Scientists estimate that this silent earthquake would have been equivalent to a magnitude 6.0 earthquake if it had caused seismic waves. If other thrust faults in places such as Los Angeles manage to move aseismically, then they might release stresses that would otherwise build up to cause earthquakes.

Radar data used in this research were acquired by the ERS satellites operated by the European Space Agency, which kindly made these data available for research. Part of this research was performed at the Jet Propulsion Laboratory, California Institute of Technology, under contract with the U.S. National Aeronautics and Space Administration. Research was also performed at the Centre for the Observation and Modeling of Earthquakes and Tectonics supported by the U.K. Natural Environment Research Council, and at Stanford University. Landsat has been providing visible and infrared views of the Earth since 1972. The Landsat archive is managed by the U.S. Geological Survey’s Eros Data Center (USGS EDC).