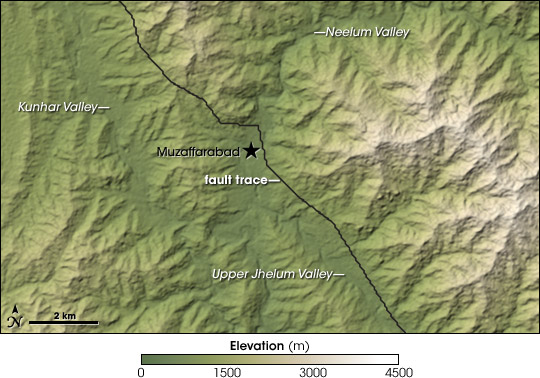 In October 2005, a magnitude 7.6 earthquake occurred in the Kashmir region of Asia, an area in the Himalaya Mountains of Pakistan and India. It was the most deadly quake in the region’s recorded history, claiming at least 80,000 people’s lives in building collapses and landslides. Although earthquakes are common in the area, one of the outcomes of the October 2005 quake was rare: visible cracks and other deformation at the surface along the fault. This surface rupture is one reason why the quake was so deadly.

This image shows the location of the surface rupture based on comparison of pre-and post-quake images from the Advanced Spaceborne Thermal Emission and Reflection Radiometer (ASTER) on NASA’s Terra satellite. The fault trace, where ground movement was visible at the surface, is overlaid on a topographic image of the region based on ASTER digital elevation model (DEM) data.

Often, geologists trace the path of surface ruptures by hiking through the earthquake zone and mapping obvious rearrangements of man-made features that were continuous prior to an earthquake, like fences or roads. But outside of the area’s few small cities and towns, most of Kahsmir is rugged and remote, as this topographic image shows. Not only is the terrain difficult to cross on foot, but there are few man-made features to serve as reference points for earthquake mapping. By overlaying a post-quake image of the area on a pre-quake image and carefully aligning them, geologists were able to identify small changes in the appearance of the surface that allowed them to trace the location of the fault across the Earth’s surface.

The analysis revealed a continuous rupture extending over a distance of 75 kilometers (46.6 miles). The cracks and other ground deformation occurred within in a narrow horizontal zone just a few hundred meters wide in most places. The path of the rupture ran northwest along the eastern side of the Upper Jhelum River Valley for about 60 kilometers, veered sharply westward near the mouth of the Neelum River Valley, and continued northwest along the eastern ridge of the Kunhar River Valley for another 15 kilometers. The path follows two faults that have generated earthquakes in the area before: the Tanda Fault southeast of the Neelum River and the Muzafarrabad Fault to the northwest.

To learn more about the 2005 Kashmir earthquake and the tectonic forces that drive the area’s earthquake activity and to see additional maps and images related to the event, read the feature article When the Earth Moved Kashmir.

NASA map by Robert Simmon, based on data from ASTER and COSI-Corr. Caption by Rebecca Lindsey.