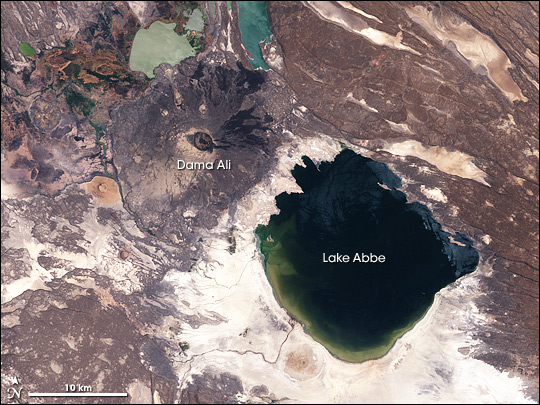 Lunar, desolate, strange, and unsettlingly beautiful are all words that travelogues have used to describe the landscape around Lake Abbe. The same words could be used to describe this image of the region, captured by the Landsat 7 ETM+ (Enhanced Thematic Mapper plus) on April 11, 2003. Lake Abbe straddles the border between Ethiopia and Djibouti and is the largest and last of a chain of six lakes fed by the Awash River. The dark blue-green lake lends color to a land otherwise dominated by browns and black. While it may look like an oasis in a desert landscape, Lake Abbe is salty and dotted with hot springs because of its unusual geology. The lake sits at the juncture between three tectonic plates in the middle of the Afar Depression.

The Afar Depression is fascinating to geologists because it is the birthing ground for a new ocean. The depression is forming as the African plate splits into the Nubian and Somalian plates. The Arabian Plate split away from the African plate through the same process, creating the Red Sea. In a few million years, the Indian Ocean will break through the coastal highlands and flood the Afar Depression, creating a new ocean and making the Horn of Africa a large island. Lake Abbe lies in the basin at the junction of the Arabian, Nubian, and Somalian plates.

The strain caused by the splitting Nubian and Somalian plates created the other-worldly landscape around Lake Abbe. As the two plates drift apart, the crust above them thins until it cracks. Magma pushes to the surface through the thin spots, oozing out to form new land. In the ocean, this process results in sea-floor spreading. But in East Africa, the process is happening on dry ground, where it is called continental rifting.

Lake Abbe is surrounded by rift volcanoes. The largest is Dama Ali, a large shield volcano northwest of the lake. The volcano is dark with basalt in this image. Fresh flows on the east side of the volcano are black. Smaller circular domes surround Dama Ali on the north, west, and south, making the landscape resemble the crater-marked surface of the Moon or Mars.

NASA image by Robert Simmon, based on data from USGS Earth Explorer. Caption by Holli Riebeek.