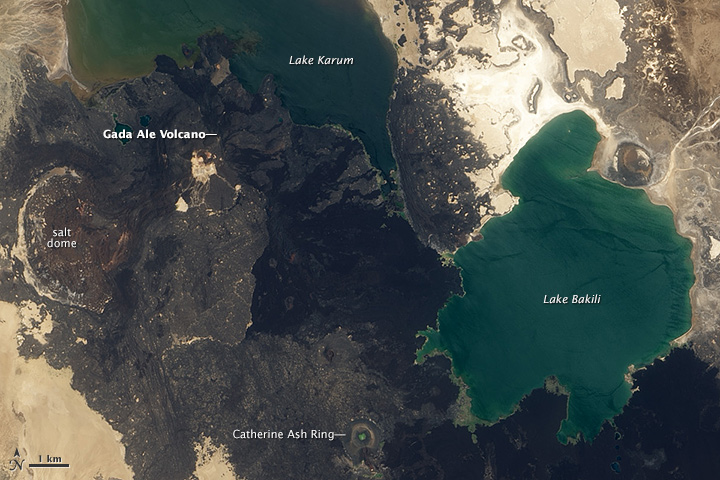 Like some fantastical land conjured by a storyteller, Ethiopia’s Danakil Depression (or Afar Depression) exhibits some uncommon wonders: lava that burns blue, bright yellow hot springs, and lakes of bubbling mud. These otherworldly oddities are all manifestations of a tectonic process called continental rifting. In other words, the Earth is pulling apart at the seams here.

In northeastern Africa, the Arabian, Somali, and Nubian (or African) plates are separating, thinning Earth’s crust as they pull apart. The Danakil Depression lies between the Danakil Alps (east) and the Ethiopian Plateau (west), which were once joined until the rifting process tore them apart. The land surface is slowly sinking, and Danakil Depression will someday fill with water as a new ocean or great lake is born. But for now, the region is full of other interesting liquids.

Acquired on June 27, 2014, the Landsat 8 image above shows a few of the diverse and compelling features of the Danakil Depression. Chief among them is Gada Ale, the northernmost volcano in the Erta Ale volcanic range. Gada Ale is a 287-meter (942-foot) stratovolcano built of lava and ash, and it has a crater lake full of boiling mud and sulfurous gases. Basalt lava from the volcano paints the surrounding terrain a dark hue, with the youngest flows being the darkest colors in the satellite image.

Just southwest of Gada Ale, a 2-kilometer-wide salt dome has pushed ancient lava flows up to heights of 100 meters (330 feet). North of Gada Ale, a salt lake (Lake Karum) lies 116 meters (380 feet) below sea level. To the south lies the Catherine Volcano, a 120-meter (400-foot) circular shield surrounded by a tuff ring (an amalgamation of volcanic ash). With gently sloping sides of basaltic lava, the volcano has been dated at less than one million years old. In the center of that tuff ring is a small, salty lake fed by thermal springs.

The Afar people have survived in this unforgiving region for at least 2,000 years, mining and selling the plain’s abundant salt, which was once used as currency in Ethiopia. The harsh desert also has created an ideal exposure for the tectonic rifting—a process that often occurs on the recesses of the ocean seafloor or elsewhere on land where younger sedimentary rocks obscure the geologic record.

The first modern studies of the Danakil Depression did not occur until the winter of 1967–68, when a French-Italian expedition took place. At the time, developments in plate tectonic theory made the region a research hotspot. The tectonic processes visible in the Danakil Depression are like “the development of the proto-Atlantic by rifting of Pangea,” scientist Enrico Bonatti wrote in a 1971 Science article. Competing interpretations of the region’s geology and controversies about the tectonic implications were kicked about in the scientific literature for years.

Ethiopia’s most active volcano has seen a surge of recent activity.